The Maori Party has renewed its call for 5 November to be recognised as Parihaka Day to commemorate the sacking of the pacifist settlement in Taranaki by government troops and militia in 1881. 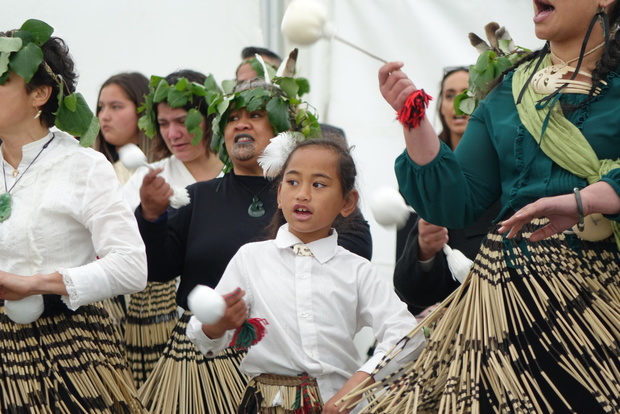 The story of Parihaka performed at the Taranaki Treaty settlement in September. Photo: RNZ / Robin Martin

Party co-leader Marama Fox said it made more sense for New Zealanders to recognised the significance of Parihaka rather than Guy Fawkes, a foiled act of terrorism in a faraway land.

While many New Zealanders will light fireworks tonight in recognition of the failed Gunpowder Plot to blow up the House of Lords in 1605, a far smaller number will commemorate an event much closer to home.

On this day in 1881, about 1500 colonial troops marched on Parihaka, plundered the settlement and arrested and exiled prophets Tohu Kakahi and Te Whiti o Rongomai, leaders of a passive resistance movement to land confiscations.

Mrs Fox said it was inappropriate for New Zealanders to be celebrating Guy Fawkes.

"When I was a child they used to still make a guy from straw and hay bales, and set it on fire. That's effectively burning an effigy and in fact as a child I thought that was the scariest thing I'd ever seen in my life."

"We could celebrate peaceful action, but also peace amongst families, peace amongst communities and advocate for something that is not a terrorist action in a far off country that we hold very little allegiance to in this day and age."

Caritas, the Catholic Church's agency for justice, peace and development has also been exploring the idea of Parihaka Day with the settlement.

Taneora Ryall from Caritas said it made contact with the village in response to interest from parishes and Catholic schools that wanted more information on what happened there.

"We know that plenty of people in our community will be remembering the invasion of Parihaka on the fifth of November. We support the commemoration of this day as an example of a Maori community that led the way in non-violent resistance and continues to represent efforts at reconciliation between Maori and pakeha."

Mr Ryall, however, said any call for a Parihaka Day should come from the settlement itself.

The speaker for Te Paepae o te Raukura, at Parihaka, Ruakere Hond, said there was a desire in Maoridom for recognition of what happened during the Maori land wars and a Parihaka Day could provide that.

"What were the strategies used by our tipuna to assert tino rangatiratanga. It wasn't just about fighting and violence, there were many other forms of communities striving to survive and find strategies and ways of living and surviving in difficult times, and Parihaka is a good example of that."

Mr Hond said there were many events worthy of commemoration and that for any Parihaka Day to work for his community there would have to be a recognition of what the settlement represented.

A Parihaka Day would however help to provide a living legacy for the teachings of the prophets Tohu Kakahi and Te Whiti o Rongomai, he said.

The documentary Tatarakihi: The Children of Parihaka will screen at 11am and 5pm today at the Len Lye Centre in New Plymouth, and a Parihaka memorial services will be held at the Taranaki Cathedral at noon.