The Canterbury Regional Council is getting tough with farmers who are breaching their water consents, and says those who continue to flout the rules will be prosecuted and could even lose their rights to the water.

Canterbury's regional council has issued a final warning to farmers who are breaching water consent rules, and says it will start initiating prosecutions soon. 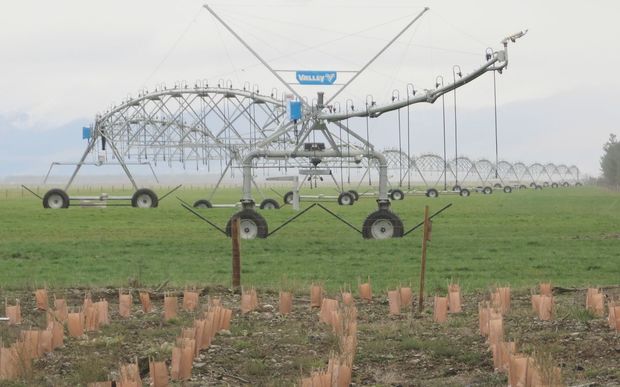 Dairy farm restoration planting, with an irrigator and in the background. Photo: Supplied

The council, Environment Canterbury (ECan), moved to enforce the requirement for water meters after Forest and Bird complained about the number of farmers still breaching the rules three years after they came into force.

Forest and Bird released documents this month, obtained under the Official Information Act, that showed one in five farmers in Canterbury with water consents had serious non-compliance issues.

It estimated at least 2.4 billion litres of water were taken illegally by farmers in the 2013-2014 year.

However, the council had largely used education and encouragement, rather than enforcement, to persuade holders to comply.

Forest and Bird lawyer Peter Anderson said the organisation was glad to see the council talking tough, but wanted to see that followed up by action.

He said the big gap in the council's approach so far had been its unwillingness to take serious action against the worst offenders.

"That effectively meant the worst offenders were able to get away with it on the basis that ECan was going to turn a blind eye.

He said prosecution could result in a fine of up to $600,000, but an equally serious repercussion could be the loss of the right to the water.

"We don't want to start this season with anyone not complying with the water metering regulations," said Mr Bayfield. "I would imagine that if there are still a few recalcitrant farmers who haven't got the meter installed we will have to look at prosecution."

Mr Bayfield said there had been huge progress in the last five years, with the number of water consent holders with water meters going from only 500 to more than five thousand.

He said there were still between 200 to 250 consent holders who had given no indication they planned to get a meter.

He said the council had always been working towards tougher regulation of the consent holders, but admitted the information released by Forest and Bird had highlighted the problem.

Canterbury farmer Darryl Brown said he had irrigation on his farm for 10 years, and it had been metered for seven.

He was welcoming the council's crackdown on those not complying. He said it would be positive if everyone was on an even playing field, and everyone was contributing to preserving the water resources.

Environment Canterbury said it was hopeful that it could achieve 100 percent compliance before the 2016 irrigation season starts in September.