Supporters of an organ donor register are frustrated the matter has gone back to the drawing board after years of campaigning. 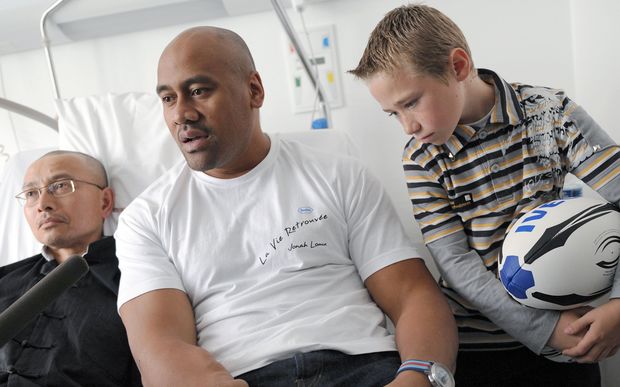 Jonah Lomu, who died in November 2015, campaigned for organ donors in France after his 2004 kidney transplant. He is pictured visiting transplant recipients in Bordeaux Hospital in 2008. Photo: AFP

The government is reviewing how to improve organ donation rates but has stopped short of recommending a register be created.

This has frustrated some campaigners, who are disappointed with a lack of progress and believe a donor register is the key to increasing public awareness and donation rates.

One campaigner, Andy Tookey, has a daughter who has been waiting 14 years for a liver transplant.

Mr Tookey told Nine to Noon six out of 10 families said no to organ donation when a loved one died, regardless of the person's wishes.

But that number could be reduced by having a register, he said.

"It would be a consent register, so if you want to be an organ donor you put yourself down on the register.

"It would be online, so you could sit with your family and discuss it, and not stand in line at the driving licence centre and tick a box."

Mr Tookey said a register was the most robust way of indicating someone's wishes and provided a higher level of informed consent by the donor.

Wellingtonian donated despite lack of licence

When Michael Boyes died in February, his organs were donated to seven people, despite him not owning a driver's licence.

"My eldest daughter Rachel recalled a conversation with Michael where she had shown him her driver licence. He was sad about the fact that he couldn't register the fact that he wanted to be a donor on his [Hospitality Association proof of age] 18 plus card."

A register would provide a higher level of informed consent by the donor and could increase the number of people donating, thus saving more lives, Mr Boyes said.