They are calling for more discussion about how organ donation could be boosted, from both the living and the dead.

However, the topic is a sensitive one, involving complex ethical issues.

Doctors say there are nearly 700 people waiting for a kidney transplant and their best chance is a transplant from a live donor before they need dialysis. 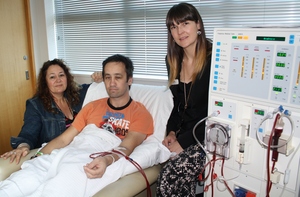 However, many find that hard to achieve.

Christchurch City Council team leader Nathan O'Connell, 39, has had two kidney transplants since his kidneys failed 14 years ago and he went onto dialysis.

The first transplant was from a deceased donor, and when that failed he had a transplant from a live donor - his brother.

He says he was lucky to have a huge amount of support, but the process was still very lonely and frustrating.

Wellington health researcher Paula Martin, who has been a live donor, says the onus is on the person needing the transplant to find the live donor.

The only other option to prolong a person's life is a kidney from a deceased donor, but New Zealand has a low and static rate of deceased organ donation compared with similar countries.

Kidney Health New Zealand medical director Kelvin Lynn says the organisation gets about 38 - 40 donors a year. That equates to eight donors per million of population, compared with twelve in Australia and more than 30 in Spain.

He says people whose lives could be saved are dying waiting for organs.

Auckland transplant specialist Stephen Munn says the supply of kidneys from both deceased and living donors could be increased.

Professor Munn says it makes a difference to put a doctor in intensive care whose primary focus is on making sure that every person who could be a brain dead organ donor is considered and their family approached.

More about organ donation in New Zealand can be heard on Insight on Sunday.