It's time for the country to wake up and learn how to talk about abuse, says a survivor of decades of family violence. 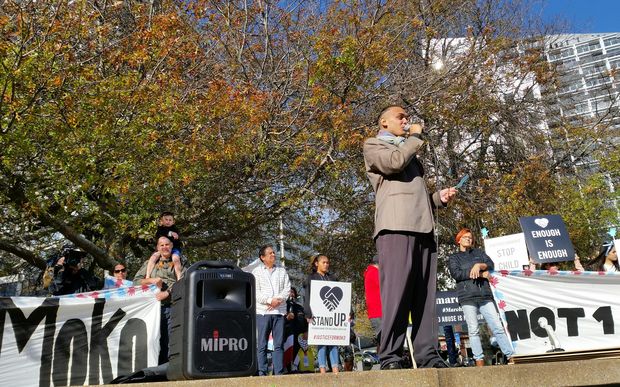 Terata Hikairo, a child abuse survivor, says his family is haunted by the death of a child. Photo: RNZ / Mohamed Hassan

Thousands of people marched across New Zealand and Australia yesterday, prompted by the death of three-year-old Moko Rangitoheriri at the hands of his carers.

Under patches of rain, hundreds banded together at Aotea Square to say what has been said many times before - end family violence.

It was a message reignited by the death of Moko Rangitoheriri, which was for some a painful reminder of the past.

Terata Hikairo is a survivor of intergenerational violence which, for his family, began with the murder of a child 40 years ago.

"There was just a child that died, and a lady who got committed to Carrington Hospital because she killed someone - and that was my Nan." 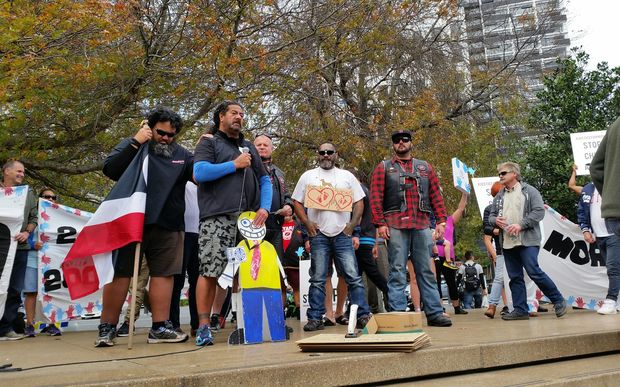 Vic Tamati (with microphone) told the marchers he was a former perpetrator of family violence. Photo: RNZ / Mohamed Hassan

Mr Hikairo said his mother, who was a girl at the time, was so worried about the safety of her 18-month-old brother, that she convinced her school principal to allow her to bring him to school with her.

She was afraid her young brother Steven might be beaten up at home.

However, one day, Steven didn't go to school with her.

"That was his last day alive," said Mr Hikairo. 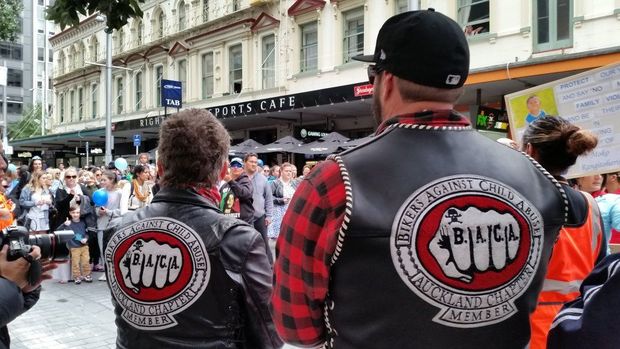 Bikers were among those who were protesting at Aotea Square. Photo: RNZ / Mohamed Hassan

Mr Hikairo said no one in the family wanted to talk about the death, and the cycle of violence was inherited by his mother when she got older.

He said she regularly beat him and his siblings until she was arrested and charged for assault, and nearly had her children taken away by Child, Youth and Family. 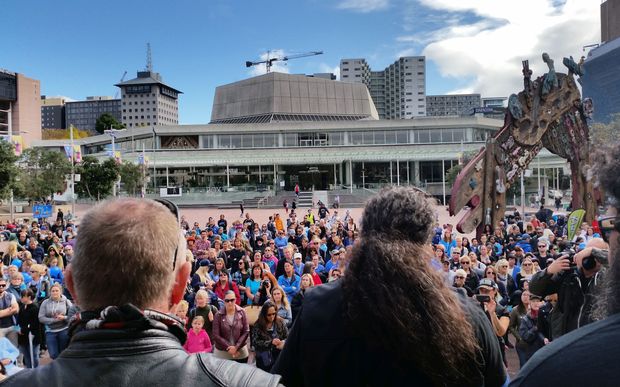 Now a primary school teacher, Mr Hikairo said he made sure that cycle stopped with him, and said it was vital that people spoke up when child abuse took place, but also listened.

"The thing that's going to make this really work is when people listen, and they listen with love, that love surrounds families, communities."

"That's the way we'll make an impact on child abuse statistics in New Zealand, through aroha, through love." 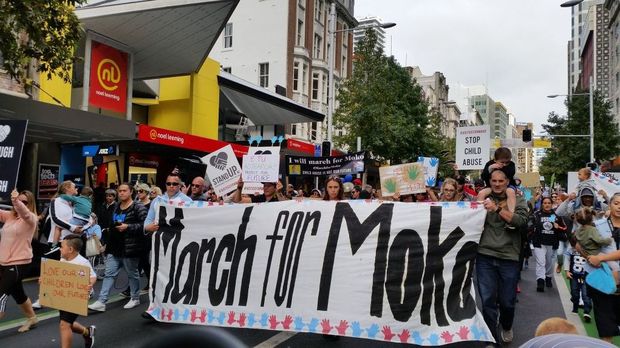 Speaking to Morning Report today, Mr Hikairo said people were not aware or ashamed of the country's family violence problem.

He said there had been around 200 deaths similar to Moko in the last 20 years.

"It's an indication that people aren't really aware of how much of a shame this is on our country. People are just not ashamed about it, so I think the campaigns are doing really well, but people just aren't aware of how terrible this is."