New Zealanders have gathered all over the world - from Turkey and France to Jakarta and Iraq - to remember those who served overseas. 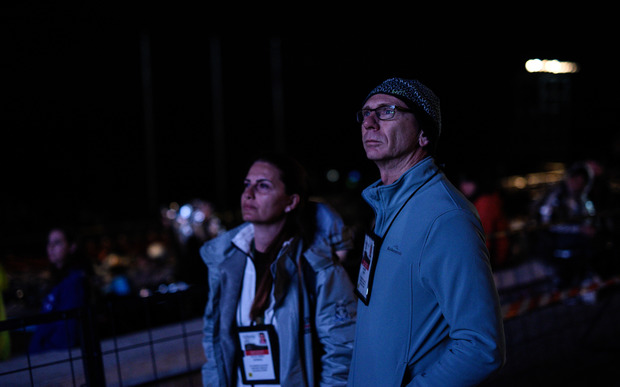 Earlier today, dawn and civic services were held in nearly every town in New Zealand for Anzac Day.

Services were also held across Australia, and then several hours later in London, France and Belgium.

The greatest number of New Zealand soldiers killed during the war died on the battlefields around the Somme in France during 1916.

Fifteen-thousand members of the New Zealand division went into action in a push designed to crack the German frontline.

In 1917, thousands more were killed and wounded at Messines and Passchendaele in Belgium.

Colonel Krushka commands the New Zealand Army's commemorative contingent, which is attending services this weekend in Europe - including in the French town of Le Quesnoy.

Nov 1918, It was the NZ's last major action. To this day, Le Quesnoy continues to mark the role that NZ played. pic.twitter.com/BOXFl0QBuJ

New Zealand soldiers liberated the town from the Germans in 1918 by scaling its wall.

"We were there about three days ago, and we saw them preparing for this - putting up France's flag, New Zealand flags, all around the streets in the town centre," Colonel Krushka said.

"Then when we were there today, an absolutely fantastic turn-out from the locals and we really felt well supported."

He said those in Europe appreciated the scale of New Zealand's commitment relative to its size.

"They realise how much we as a small nation have committed over here, and the huge casualty rate that we had." 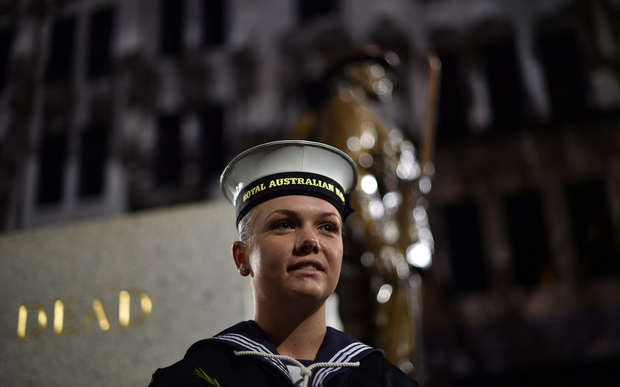 An Australian soldier stands in front of the Cenotaph following a dawn service in Sydney. Photo: AFP

In the UK, Prince Harry was expected to attend three Anzac Day commemoration services in London.

The events, organised by the New Zealand and Australian High commissions, include a dawn service at Wellington Arch, a wreath-laying ceremony and parade at the Cenotaph, and a service of commemoration and thanksgiving at Westminster Abbey.

Anzac Day has been officially commemorated in the city since the first anniversary of the Anzac landings at Gallipoli in Turkey in 1916, when King George attended a service at the abbey.

Thunder, lightning and rain greeted New Zealanders and Australians arriving for this year's memorial event at Anzac Cove in Gallipoli.

More than 1000 people were understood to have gathered for an overnight vigil and reflective programme, followed by today's dawn service.

Visitors then started the 6km walk from the beach up to Chunuk Bair for the New Zealand service.

The attendees at the Gallipoli Dawn Service with the Sphinx slowly appearing out of the dawn pic.twitter.com/0LQFi7iI9t

Defence Minister Gerry Brownlee was expected to attend, alongside representatives from Australia and Turkey.

The event's New Zealand lead, John McLeod, said the service would not be as grand as last year's centenary, but it would be the same emotional experience for those attending.

"You feel like you're in the footsteps of an incredible piece of New Zealand history, of Australian history ... I certainly feel very privileged to be a part of the organisation of it."

Many visitors stopping at Lone Pine on way to Chunuk Bair. Looking resplendent on this special day. @Bennett22David pic.twitter.com/vZlkWpQZDu

Standing off Chunuk Bair waiting for completion of security sweep. Four and a half hours until the NZ Service pic.twitter.com/iv8ef565Ys

Hundreds of New Zealanders and Australians stationed in Iraq, meanwhile, joined an Anzac Day ceremony on their base in Taji, northwest of Baghdad.

The soldiers - more than 100 New Zealanders and 300 Australians - are part of a combined mission to train the Iraqi Security Forces.

Observers said today's service was particularly poignant for the soldiers, who were part of the largest joint New Zealand and Australian taskforce to the Middle East since Gallipoli.

After the dawn service, soldiers had a customary "gunfire breakfast" - but without the traditional ration of rum in their coffee, due to an alcohol ban reportedly imposed by the New Zealand command. 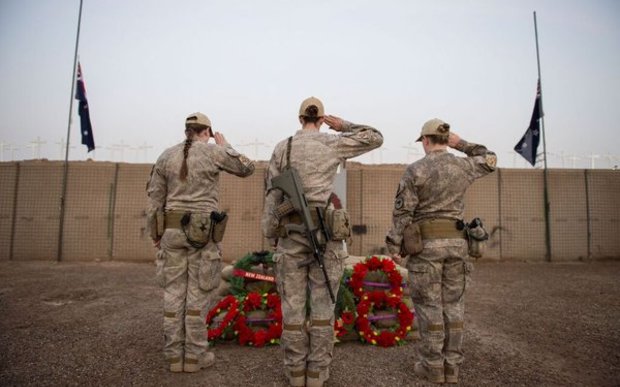 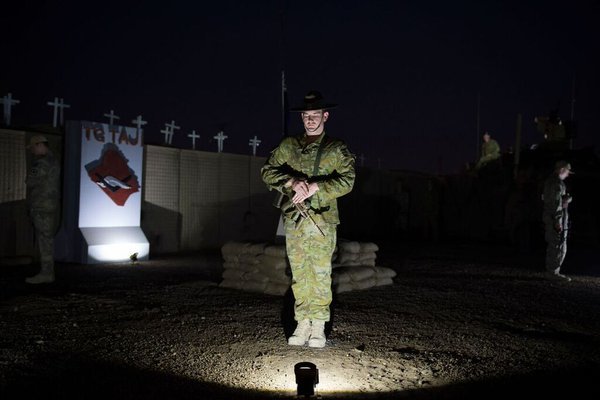 Soldiers from both countries will tonight cram around a solitary television set to watch the annual clash between St George Illawarra and the Sydney Roosters, and the other games in the NRL's Anzac Day triple-header.

Australians and New Zealanders also gathered in Jakarta for a dawn service to recommemorate past and present serviceman.

The gathering remembered those who died in defence of Java and Sumatra during the Japanese advance in 1942, and also those held for years by the Japanese.

This included 65 army nurses, who were evacuated from Singapore in February 1942.

Their ship was bombed and sunk, and 33 of them were lost at sea or rescued then executed by the Japanese.

The rest spent three and a half years as prisoners of war. 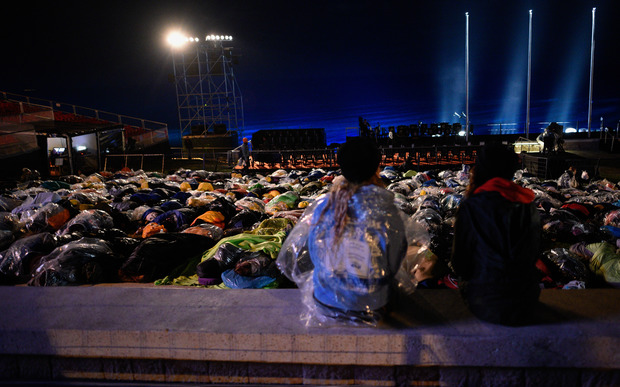 Wet weather cleared towards the end of this morning's event at Anzac Cove. Photo: AFP 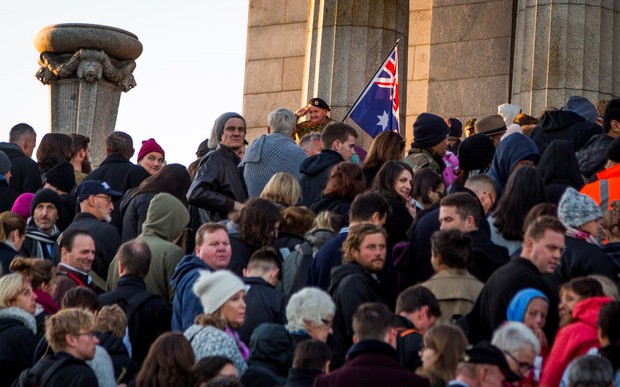 People line up to pay their respects at the dawn service in Melbourne. Photo: AFP