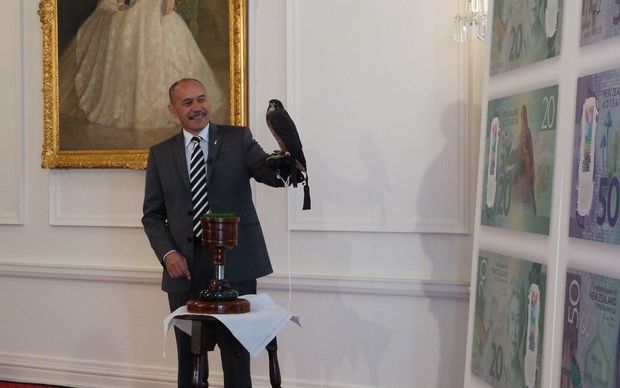 The notes shown off today follow the release of the "series 7" $5 and $10 notes in October.

The new bills are brighter in colour with larger text but their design elements remain largely unchanged.

The Reserve Bank said the notes were upgraded to benefit from technical advances in security.

It also hoped the changes would make the notes easier to differentiate for people with impaired vision.

All of the new notes will incorporate four main security features to make them harder to counterfeit: a holographic window, a colour-changing bird, a puzzle number and raised ink.

The new notes were thought to have cost about $80 million to print, plus an additional $40m for the security features.

Te reo Māori will feature more prominently, with the words Te Pūtea Matua, which means Reserve Bank, on the front and Aotearoa on the back of each note.

The watermark of the Queen has also been removed from the designs. 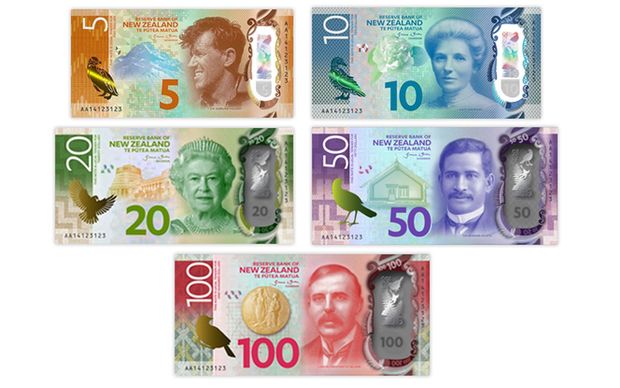 The new banknotes will enter circulation on 16 May. Photo: Reserve Bank of New Zealand

Sir Jerry and Lady Janine launched the new $20, $50 and $100 this morning in the ballroom at Government House.

The notes showed who New Zealanders were and what they valued, Sir Jerry said.

"On our largest value note, the $100 note, Sir Ernest Rutherford's image on it reflects the international standing which he attained for his ground-breaking contributions to science and technology," he said.

"If we turn to the $50 note, Sir Āpirana Ngata's image acknowledges his profound and lasting contribution to Aotearoa, New Zealand, politically, socially, culturally, and economically.

"His image also serves to remind us of the importance of our bicultural roots and of the links between the past, our present and our future."

The native falcon appears on the $20 note, with a member of the species brought in by the Wingspan Trust for the launch.

"Today, we have another one of our precious taonga with us, in the flesh. It is the first time a kārearea, New Zealand falcoln, has been at a function in this ballroom," Sir Jerry said.

No new coins are set to be introduced. 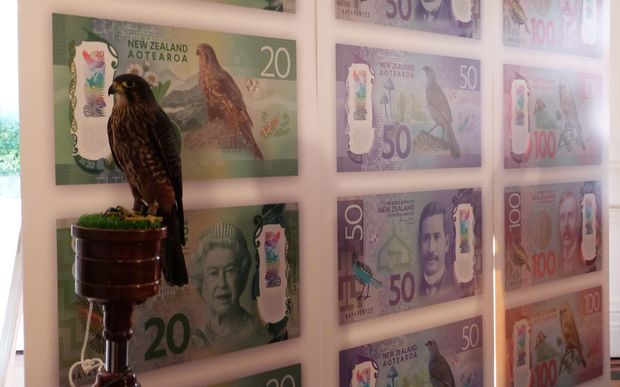 The kārearea sits before posters of the new banknotes, including the $20 note on which it features. Photo: RNZ / Tiana Barns