The new $5 note has been in the tills for only a few months and already it's among the world's best.

Series 7, as the Reserve Bank is calling it, has been named as a finalist for banknote of the year by the International Bank Note Society. And yes, that is a real competition. 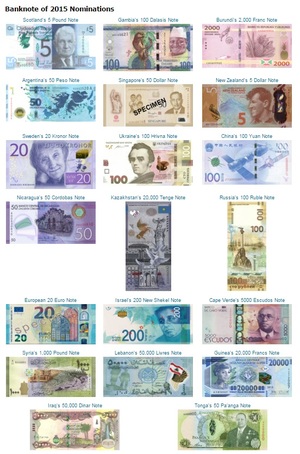 It's up against a few international examples and the winner will be announced next month.

Mountaineer Sir Edmund Hillary features prominently on the note, something he was "quite tickled-pink by", his son Peter Hillary said.

"In some ways I think he felt a level of embarrassment, but I think he was quietly chuffed, which was quite typical of him."

It was always nice to see his father's profile on the note, he said.

"I think it is a wonderful new version of the $5 bill so I think it definitely deserves to be recognised, so I hope it does well."

Twenty notes which were issued last year are contending for the title. They include the European 20 Euro note, Syria's 1000 pound note and Tonga's 50 Pa'anga note.