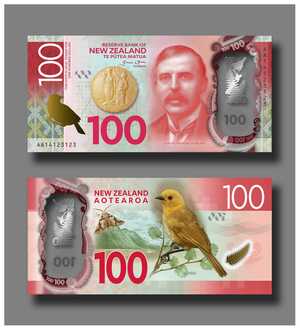 The Reserve Bank has unveiled a more vibrant design and has added the words Te Putea Matua which means Reserve Bank on the front and Aotearoa on the back of each note.

Although Maori words are printed on the current banknotes, they are only used to name native birds such as the Hoiho for the Yellow Eyed Penguin featured on the $5 note.

Reserve Bank Deputy Governor Geoff Bascand says the bank worked with Te Puni Kokiri and the Maori Language Commission on what Maori words to use to acknowledge Te Reo as one of New Zealand's official languages.

He says it was a real opportunity to upgrade the banknotes to make Te Reo Maori more prominent.

Mr Bascand says the tukutuku art designs in the background on the new banknotes are also much sharper.