A big supermarket chain is pulling eggs from its shelves that come from a Waikato farm at the centre of an undercover investigation, which revealed hens packed into filthy overcrowded cages and laying fresh eggs on the rotting corpses of others.

However, Countdown supermarkets will still be picketed tomorrow by animal rights protesters, who are demanding all caged eggs be taken off the market.

The covert footage, shot at Heyden Farms in Waikato last month, showed featherless chickens crammed against the bars of faeces-smeared cages, with dead and dying birds crushed underfoot and others trapped beneath perches and left to starve.

Farmwatch spokesperson John Darroch, who has spent 10 years campaigning to have battery hen cages banned, said he had never seen hens suffering as much as in these colony cages, which were being phased in as what was thought to be a humane alternative.

Decapitated heads and wings were scattered around the shed, he said.

"Workers are just ripping them out. It took me 20 minutes to rescue one trapped hen and I don't think any worker is going to put that amount of time into rescuing them. So I think that what goes on inside these farms is barbaric." 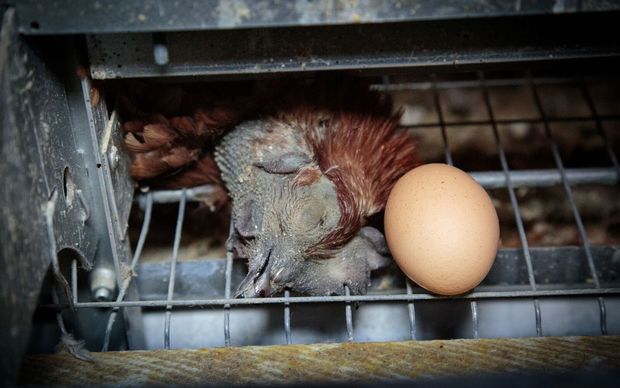 A dead chicken lies next to a freshly laid egg Photo: Supplied

He was shocked it had taken the Ministry for Primary Industries (MPI) 10 days to send inspectors to the farm after receiving the footage, and further dismayed to learn the farmer was not being prosecuted.

"It really raises the question, what's the point of having standards at all if MPI aren't going to enforce them?"

Animal advocacy group SAFE (Save Animals From Exploitation), which laid the complaint with the ministry, said the footage was proof that the new colony cages were no more humane than battery cages, which would be banned from 2022.

Its executive director, Hans Kriek, said consumers were being misled by the use of the term "colony farming" into believing these hens were not being kept in cages.

"And even more shockingly, here we have our government and the industry sort of pretending that everything is all right now, that we're getting rid of battery cages.

"But we're not getting rid of battery cages, we're just replacing one battery cage with another and the animals simply continue to suffer."

Countdown said the Farmwatch footage was "disturbing and disappointing".

In a written statement, spokesman James Walker said Countdown did not stock any colony-caged eggs from Heyden Farms, but it did sell a small number of conventionally caged eggs supplied by the farms under the brand Morning Harvest.

"These will be removed from shelves from today until we are reassured that the farm is up to standard.

"We are hopeful that other retailers stocking this brand will seek the same reassurances.

"We are getting in touch with all our egg suppliers today and reinforcing the importance of complying with the Code of Welfare and Countdown's own animal welfare expectations."

Threshold for prosecution not met - MPI

In a written response to questions, MPI said a detailed two-day investigation of the facility found some breaches of minimum standards, which did not reach the threshold for prosecution but did require corrective action.

"MPI has continued to engage with the facility following the investigation and, at this stage, we are satisfied the corrective action has been taken.

"This involved a thorough review of the farm's systems to ensure it addressed the identified issues around frequency of stock checks, overcrowding of individual cages and removal of dead birds from cages. We will, however, follow up with the facility to ensure this continues."

A MPI spokesman said the ministry's first priority was to mitigate the suffering of animals and ensure measures were put in place to prevent that from reoccurring.

"It is in the interest of the animals to work with the operator and make that happen as soon as possible. Laying charges is not always the best solution for the animals' future."

Morning Harvest said Heyden farms had always been responsible and the company was unaware of any past failures in the farm's practices.

"When investigated by MPI, some systems issues were found - and they have kept us advised throughout. These issues were rectified immediately - as we would have expected of a responsible industry member," the company said in a statement.

The Independent Egg Producers Cooperative, which markets Morning Harvest, has not yet responded to questions.

However, Egg Producers Federation head Michael Brooks said it was an isolated incident, and the footage was not representative of the industry as a whole - nor even of this particular farm, which he had visited twice since the MPI investigation.

"This was clearly a major lapse in farm management. I am told by the owner that the staff responsible for the overview of that particular shed have gone and he has replaced them, plus two extra staff to ensure there is better overview of the farming operations."

The deaths and feather loss in the footage could not have been caused by colony farming, which is approved by the National Animal Welfare Advisory Committee (NAWAC), he said.

"The birds filmed are clearly at the end of their laying cycle, which causes feather loss. Bird mortality occurs across all farming types and colony farming has the lowest mortality rate of them all - less than half of that of free range for example...

"Colony farming provides the best defence to the biosecurity risks to our avian industry and allows consumers the choice to purchase eggs at an affordable price.

Countdown's move to pull Heyden Farms' eggs was not good enough for SAFE or Farmwatch, which wanted the company to follow the lead of its Australian parent company and stop selling all caged eggs by 2018.

Farmwatch's John Darroch said protesters would picket Countdown's supermarkets in the Auckland CBD and the Wellington suburb of Newtown from 8am on Friday.

"We are calling on them to withdraw all caged eggs as the issues we have identified with colony cages are inherent to the system. This was a brand new farm with brand new cages so it's not like this was an isolated problem."