The Ministry for Primary Industries has launched an advertising campaign calling on people to report livestock mistreatment. 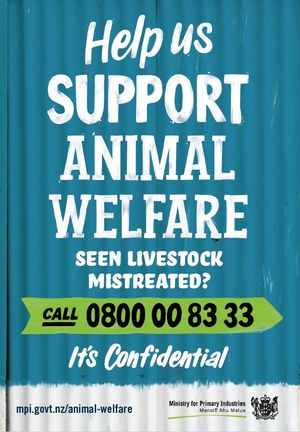 Eight organisations, including the Ministry for Primary Industries (MPI) have since formed an action group to look at initiatives for best practice in handling and managing bobby calves in New Zealand.

MPI spokesman Scott Gallacher said most livestock owners care for their animals but a small minority do not, and the ministry wants to make sure such abuse is identified and acted on.

He said the ministry wanted to make sure such abuse was identified and acted on.

"There was a pretty clear voice from the farming community that animal abuse is not on. We agree, and we want to work with farmers and other livestock owners to do something about it."

The campaign is being welcomed by SAFE executive director Hans Kriek.

Mr Kriek said if his organisation had not shone a light on the issue of livestock abuse last year, nothing would have changed.

"We've seen a lot of work happening with regards to efforts made by the industry, efforts made by the government, they have been having meetings with animal welfare groups with veterinarians, I can guarantee that would not have happened without our exposé."

Mr Kreik said he wanted people who abuse animals to be held accountable.

MPI is developing proposals for new regulations on the care and handling of bobby calves, with public consultation expected in April.

Mr Gallacher said a number of the initiatives being worked on were new, while other initiatives already underway were being accelerated.

But a Waikato farmer said she feared the new campaign could result in the public calling in with false claims.

Gaynor Tierney said she was all for reporting abuse but was worried people might start peering over the farm gate and misinterpreting standard farming practices as mistreatment.

She said 99 percent of farmers cared for their animals.

SAFE and Farmwatch started an investigation into the dairy industry in August last year.

They set up hidden cameras in 12 farms and a slaughterhouse. The resulting video shows animal cruelty, including a man violently kicking and throwing calves before bashing them and slitting their throats.

When the video was released in late November, Mr Kriek said more than 2 million unwanted male calves, known as bobby calves, were killed annually, some as young as four days old.

"In order for a cow to produce milk, she first has to produce a calf, and these calves are often surplus to requirement by the industry so they are removed from the mothers quickly after birth."

He said the footage that people were upset about revealed only a fraction of the abuse "and it didn't show the worst".