The Waikato piggery that caught fire today has been in a bad state under previous owners, says the animal welfare group Farmwatch. 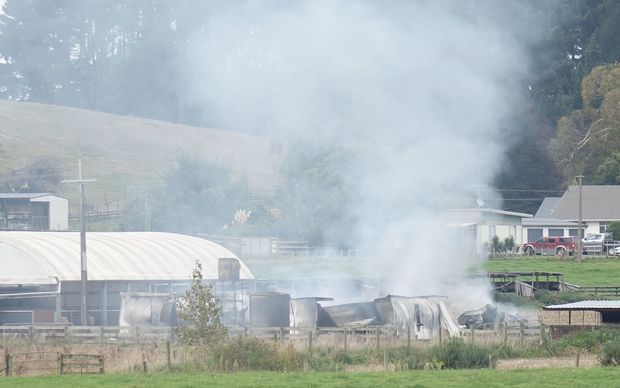 The smouldering ruins of the building Photo: RNZ / Andrew McRae

Forty pigs are dead after a farm building caught fire this morning near Taupiri.

Dozens of firefighters attended the blaze and the Fire Service said about 700 pigs were believed to be in the building.

It was the fourth fire at the piggery in the last decade.

Farmwatch spokesman John Darroch said he had twice gone undercover to the piggery - the last time was just before the current owners took over. He said the piggery appeared "dilapidated and run-down" and there were flies and rats.

Heat lamps are used to keep piglets warm, so it was common for fires to occur, he said.

"This is manifested in the fact this farm has had four fires in the past 10 years - that's what the Fire Service is saying."

Mr Darroch said he had been to at least a dozen pig farms and he had never seen sprinkler systems or a fire extinguisher despite fires being common.

The SPCA said the fire highlighted the need for animal emergency planning.

Its chief executive Ric Odom said the fire was a real tragedy for the farmer and the animals.

He said it was a reminder that people working with animals must have a robust emergency management plan in place that was not just about preventing fires from starting.

"But also really early detection, having good management plans in place so that there can be a quick response and animals can be removed from that place of danger, because after all the animals are completely reliant on the stockmen who look after them for their well being and survival."

The 800 square metre building is believed to be used for farrowing pigs.