Letting family talk with an alleged gunman while he was holed up near Kawerau would have been a bad idea, says a former negotiator. 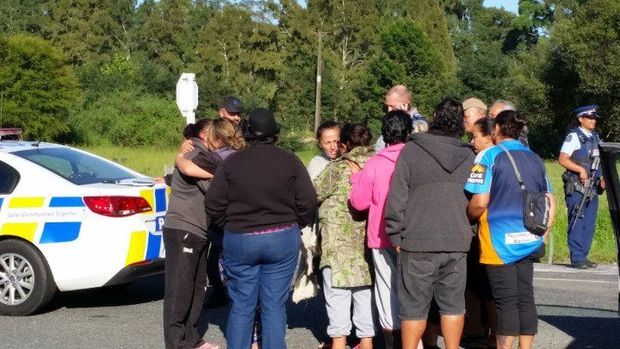 Family and friends embrace after the end of the incident. Photo: RNZ / Mohamed Hassan

The man surrendered to police this morning after a Maori liaison officer was allowed past the cordon to speak with him.

The man's whanau had raised concerns about the police refusing to allow them to negotiate the man's surrender.

Lance Burdett is a former national advisor for New Zealand police negotiation teams, and was part of the team involved in the 2009 Napier siege.

"If you recall the Napier event, we allowed the partner of [Jan] Molenaar to chat to him and he took his life very shortly thereafter.

"It's unpredictable. You bring a third person and you lose control.

"I would expect that police would be talking to the mother [of the alleged gunman].

"There's all sorts of different ways you can use them, but generally it's a last resort."

Mr Burdett said the man's emotions would have been running rife during the siege.

"A high police presence is usually a good thing. The person in the house would have seen that there and taken time to reflect on what has happened and where he goes from there."

He said it was important not to act too quickly to allow the person to think about their situation.

"Hopefully they [the police] would have stopped last night and allowed him to have a little bit of sleep and get the brain back and perhaps some time for reflection."

Mr Burdett also said police would have worked hard to build a rapport with the man in order to get him to surrender peacefully.

"They'll be trying every avenue, [from] using the loudhailer to phone, text messages, social media. Any way to make contact."