Poultry company Santa Rosa is the latest food company to issue a recall, with fears its Manuka Smoked Chicken may be undercooked. 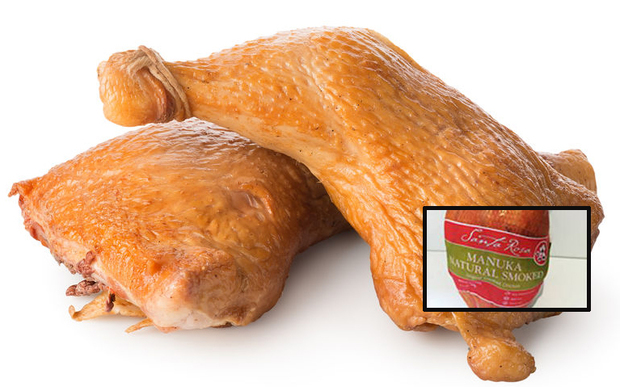 It is the third food to be recalled this month, with Beehive Shaved Champagne Ham recalled over listeria and Fruzio frozen berries contaminated with Hepatitis A.

The affected batch has a best before date of 1 January, and has been sold in New World, Pak N Save, Countdown and Four Square stores throughout the country.

Santa Rosa said there had been no reports of illness so far, but the product should not be consumed.

Santa Rosa chief executive John McWhirter said the recall was made on Wednesday, due to a one-off problem with the cooking equipment's thermometer.

"We then checked where those birds had gone, and to what supermarket, and by 10am Wednesday morning, determined we should withdraw them from the marketplace, more as a precaution. There might be a risk, but it's a very low risk."

So far this year there have been 30 food recalls, according to Ministry for Primary Industries figures, only slightly above the average of 23 over past five years.

But Michael Baker, professor of public health at the University of Otago in Wellington, said food recalls were just the tip of the iceberg. A more telling measure, he said, was the number of foodborne diseases in New Zealand.

Prof Baker said there had been 109 foodborne disease outbreaks last year; eating chicken was implicated in half of the outbreaks whose source was identified (30 outbreaks had an identified source).

Almost half the foodborne outbreaks were linked to a pathogen, with norovirus and campylobacter the most common, each accounting for 18 cases. Seven were linked to salmonella.