A storm is brewing in Waitangi over access to the country's founding document - the Treaty of Waitangi. 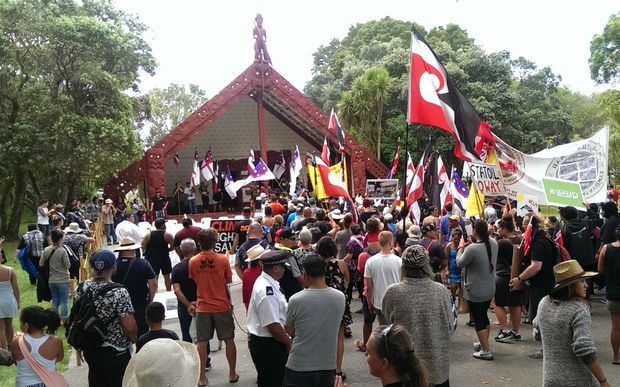 A hikoi was held at the treaty grounds on Waitangi Day 2015. Photo: RNZ / Lois Williams

The Waitangi Museum, which is set to officially open a new secure and climate-controlled area during next year's Waitangi Day (6 February), has been refused the opportunity to display the original treaty document for the day. 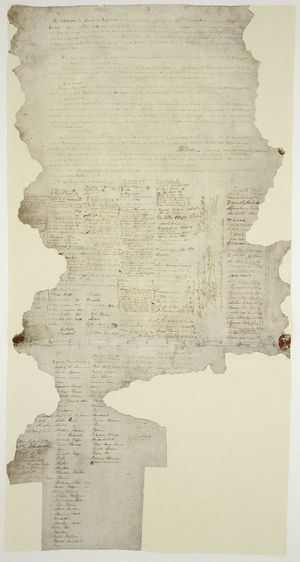 The 'Waitangi Sheet' of the 1840 Treaty of Waitangi, which is made up of nine documents. Photo: Archives New Zealand

The decision has infuriated Northland Māori, who are promising protests.

It was hoped the new multi-million dollar museum addition would house the treaty document and that visitors would be able to see it for the first time at its birthplace.

But organisers and iwi have been delivered a bitter blow by Archives New Zealand, which has declined the request.

Te Taitokerau MP Kelvin Davis said, in this day and age, the technology should be available to appropriately display taonga. He said the Treaty of Waitangi needed to be brought home and displayed in Waitangi.

Pita Paraone is the chairman of the Waitangi National Trust, which is responsible for the upgrade of the museum and has spent $12.5 million on the development. He said the new buildings were built with precious taonga in mind and were capable of housing them.

He said Archives New Zealand, which holds the Treaty of Waitangi and the Declaration of Independence, said they had declined the request based on the treaty document's fragility.

Archives New Zealand chief archivist Marilyn Little said she had had to say no to the loan because of the fragility of the document.

"At the heart of it, for both of us, is the long-term preservation of both documents. I'm sorry to the Waitangi National Trust - I can't agree to the loan ... because the document is so fragile.

"It almost takes your breath away," she said.

Mr Paraone said, while he was disappointed, he accepted that and hoped that at some point in the future they might find a solution.

But Mr Taurua said Northlanders were the caretakers of the treaty and it should be returned to its birthplace.

He said other countries publically display historic documents and New Zealand should too.

Earlier this year, for example, the British Library displayed the four surviving copies of the Magna Carta to mark 800 years since it was signed.

Northland MP Winston Peters has also waded in, saying as long as New Zealand's founding documents can be properly secured he too would support them being displayed.

Mr Davis said the descendents of the hapu who signed the treaty with the Crown 175 years ago should be able to see it for themselves at the spot where it happened.

Both the Prime Minister and Governor-General have been scheduled to officially open the Waitangi Museum's new wing.

With just four months until Waitangi Day 2016, Mr Taurua has warned - if the decision around the treaty's display is not reversed - that day will be marred by protests.