The day started on the treaty grounds with a dawn service, an interdenominational church service later in the morning, a 21-gun salute and the launching of a fleet of waka. 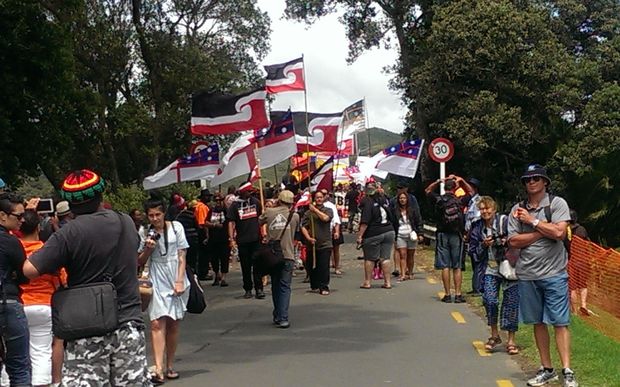 Hikoi heads over the bridge and up to the treaty grounds. Photo: RNZ / Lois Williams

The Royal New Zealand Navy has about 400 personnel at Waitangi, including three ships, helicopters and the navy band. Celebrations ended with a parade through the streets of Paihia to honour a charter the navy was given by the people of Te Tai Tokerau in 1990.

A Maori protest hikoi arrived in the treaty grounds earlier this afternoon. Watched by hundreds of people, around 300 marchers waving banners and beating drums later held a rally at the grounds.

They called for an end to deep sea oil drilling off the coast of Northland, with Radio New Zealand reporter Lois Williams saying the mood was relaxed throughout the day.

The protest hikoi was the largest seen for some years on the treaty grounds.

It was led by veteran treaty activist Mike Smith, with marchers including lawyer and activist Annette Sykes and former MP for Te Tai Tokerau Hone Harawira.

Mr Key, who plans to hold a referendum on the matter, told the more than 100 guests at the breakfast that it was time to create a new flag that was distinctly New Zealand's.

Mr Key later told reporters he raised changing the flag during the speech to show how much New Zealand has changed since the Treaty of Waitangi was signed. 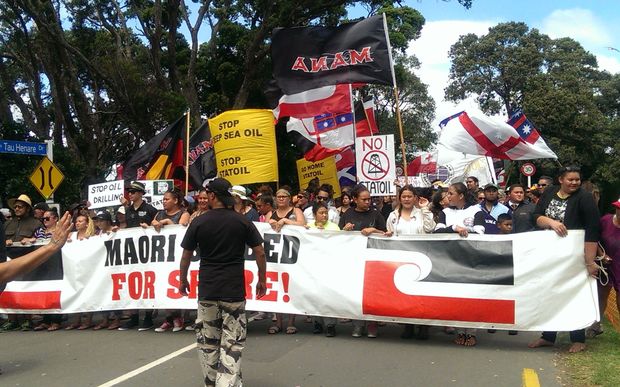 He said he would like a new flag raised at Waitangi by 2040, when the 200th anniversary of the signing of the treaty is celebrated.

"The flag itself is of no great consequence other than a graphic representation of who we are as people, but I think we can do a better job." 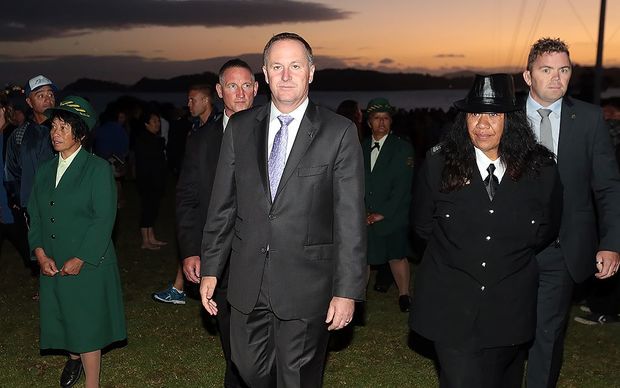 Ngapuhi leader Sonny Tau endorsed the call for a new flag. He said the flag was out of date. 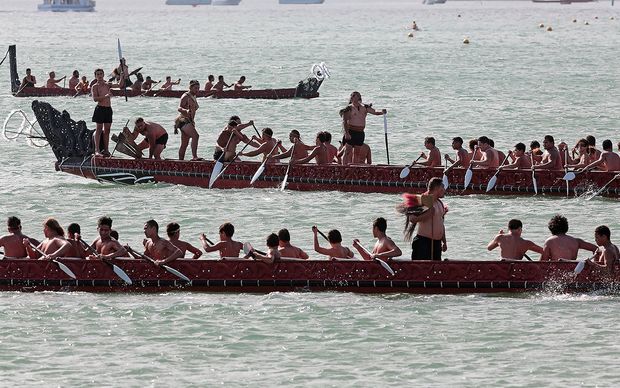 "It should be changed to reflect the growth that this nation has gone through.

"And the umbilical cords to the monarchy should be severed in terms of the flag."

This morning politicians and church leaders offered prayers for the nation in the place the treaty was signed 175 years ago today. 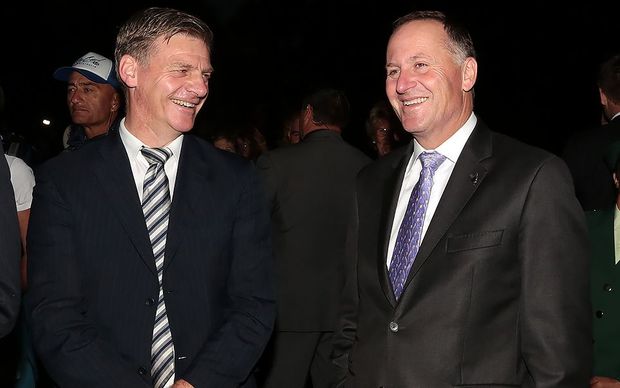 Hundreds of people poured onto the treaty grounds for the traditional dawn service, including the Prime Minister and Labour leader Andrew Little.

Politicians offered prayers praising the courage of those who signed the treaty, as an act of faith between two peoples.

Former MP for Te Tai Tokerau Hone Harawira offered a prayer and said he stood to give thanks for the treaty, and pray for its future.

"That its magic endures, that its power endures, that its mystery remains and that those of us who believe it as the foundation for good governance and good friendship in this country never falter in our steps to see it honoured one day."

Mr Harawira also prayed for the leadership of Ngapuhi saying he hoped they could rise above their differences this year, settle their treaty claims and let the iwi move forward.

Presbyterian church moderator Rev Andrew Norton made a heartfelt prayer on behalf of the poor, saying New Zealand is now a country of loaves and fishes - where many people are hungry.

He said the spirit of the treaty is manaakitanga - a mutual caring and hospitality. 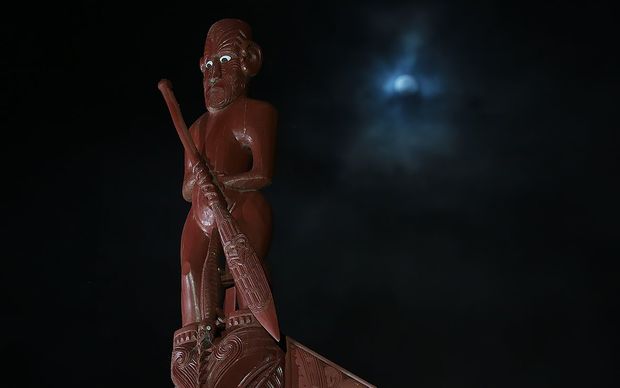 Celebrations around the country

Waitangi celebrations took place around the rest of the country today.

In Auckland, they started with a dawn ceremony in Okahu Bay.

And many more turned out to events across the city at Parnell's Barry Curtis Park, Wharekawa Marae, and a free concert at Bastion Point where the Black Seeds and Hollie Smith performed.

In Wellington, Porirua's annual festival is one of the biggest in the country.

Porirua mayor Nick Leggett said it was a chance for people to commemorate the treaty in a positive environment.

"Waitangi Day has been fraught over the years and there's been a lot of tension surrounding it. We've just got on here and done our own thing and as a result I think that's drawn more people in."

There was a 21-gun salute from Oriental Bay at midday, and a concert at Te Papa in the afternoon.

A concert was also held along New Plymouth's waterfront.

New Plymouth mayor Andrew Judd said his campaign for a Maori ward in the city has opened his eyes to the true meaning of the Treaty .

Mr Judd says in the past Waitangi Day for him meant a long weekend and a day off work.

"I realise, well, actually, it's a document that means we have to continuously work together to find a way to live together.

"It's a document that bridges us with our differences to come together to be better. I'm on a journey of learning and I just encourage people to reflect on their own sense of where they're at. Be honest with yourself - how much do you know? How much do you know about Maori culture?"

In Canterbury, celebrations were held at Rapaki Marae in Lyttleton Harbour and in Banks Peninsular.

In the deep south, Ngai Tahu marked the day at Te Rau Aroha Marae at Bluff, close to Ruapuke Island, where the treaty was signed in 1840.

As part of celebrations the marae, together with the Department of Conservation (DOC), arranged for three species of native bird to be present at the celebrations, including kakapo, takahe and kiwi.

The Government will offer all schools and early childhood centres opening this year, special plaques to mark the 175th anniversary of the signing of the treaty.

Education Minister Hekia Parata said the commemorative plaques were just one of several initiatives to mark the milestone in New Zealand's history.

Other initiatives included new Ministry of Education websites offering resources on the treaty, while other schools are taking up the offer of bi-lingual school signage.

Ms Parata said education played a critical role in nation building so it was important children, schools and communities are part of the commemorations. 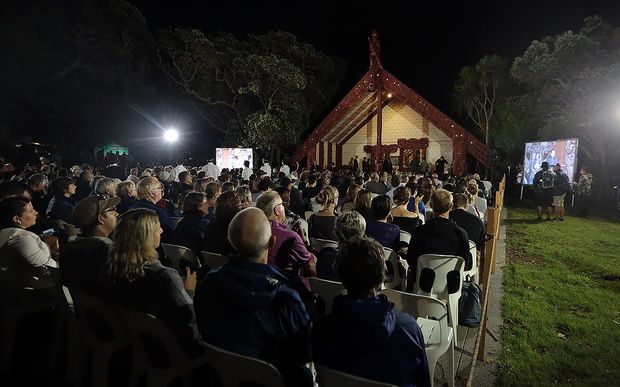