An announcement at the TPP talks in the United States has been delayed indefinitely, as negotiators continued to wrestle with issues like drug patents and dairy access. 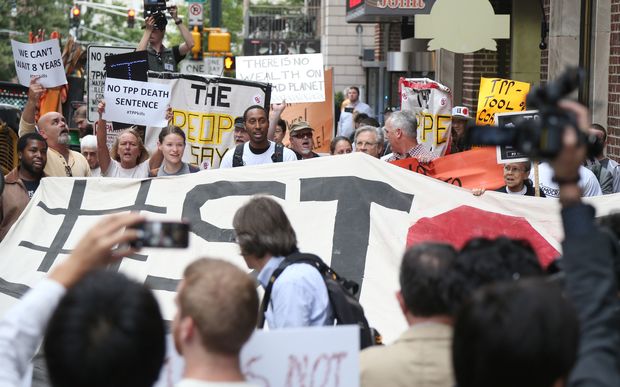 Protesters against the TPP trade talks outside the hotel in Atlanta where negotiations are taking place. Photo: AFP

Trade ministers, including New Zealand's Tim Groser, have been meeting in Atlanta, Georgia for the last five days in a bid to seal the 12-nation Trans-Pacific Partnership.

Talks stalled in Hawaii in July, but officials had expressed growing confidence a settlement would be reached this time, as the number of outstanding issues was whittled down.

A ministerial media conference was scheduled for 9am NZT, then put back to 11am, before being pushed indefinitely.

Australia and the US appear to have settled their differences over patent protections for biologic drugs, though the support of the other countries is still needed.

The authoritative Inside US Trade website said the two had circulated to other ministers a compromise proposal on how many years of protection are to be accorded creators of the cutting-edge class of drugs sourced from living materials.

A US official at the talks confirmed that "there is progress" on the issue, but would give no details.

Biologics are proving valuable sources of treatments for everything from arthritis to cancer.

A ministerial meeting broke up after only about 15 minutes near midnight on Saturday with others blaming the two countries for holding up a final deal for the TPP, a free-trade pact that would comprise around 40 per cent of the global economy.

The vexed issue of improved dairy access to US, Canadian and Japanese markets - a key outcome for New Zealand - has yet to be settled.

New Zealand's agricultural trade envoy Mike Petersen, who has has just returned from the talks, said the United States was crucial to ensuring a good dairy deal.

"It's really up to the US to take a lead and to really drive a good outcome, in thinking about where this is going to go to in the future," he said. "Because that's the key here. If we lock in a poor deal now then the risk is that it's effectively here forever."

Dairy Companies Association chairman Malcolm Bailey, who is at the talks in Atlanta, said "good progress" had been made but offers on dairy access remained "underwhelming."

Former US deputy trade representative Alan Wolff said dairy had been one of the most difficult issues."In large part because world prices are very low ... and this is a tough time to get additional dairy access."

Mr Wolff told Morning Report New Zealand would sign only if it achieved decent access to US, Canadian and Japanese markets.

A handful of protesters unfurled a "Stop TPP" banner at the Westin hotel in Atlanta on Sunday morning. They were escorted away by security and police.