New Zealand Trade Minister Tim Groser says the TPP deal is within reach in Atlanta, but if it falls at the last post there will be worrying long-term strategic implications.

The talks had been due to end on Friday but have carried on late into the weekend as trade ministers try to reach agreement on the trans-Pacific trade and investment deal. 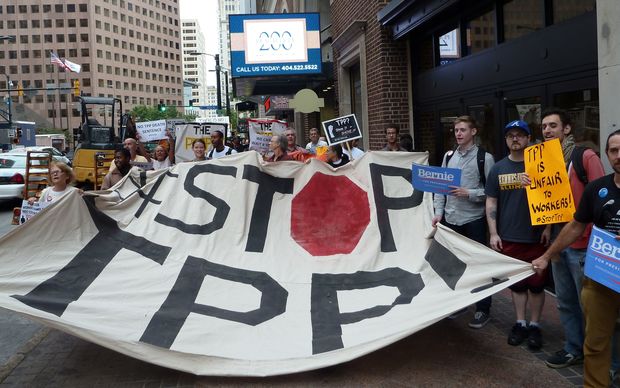 Protesters call for the rejection of the Trans-Pacific Partnership trade deal under negotiation in Atlanta, Georgia. Photo: AFP

One of the main sticking points in the 12-country deal is a push by the United States to give its pharmaceutical companies a longer period of exclusivity on new biological drugs, particularly for treating cancer.

Other countries want the patent on new drugs to be restricted to five years.

And until the drugs issue is decided, the US will not reveal its final position on access to its dairy market - something crucial to New Zealand.

Mr Groser said any failure to seal the deal would be a bad sign for attempts to bind countries together through trade and investment links.

Labour's health spokesperson Annette King said it was important the government did not fold to American pressure to have a longer patent period.

"We need the government to be fighting hard to ensure we do have that access. New Zealanders want it. Already we're struggling to provide the up-to-date, modern drugs with the five-year patent," Mrs King said.

Biological drugs are next generation medicines that are made by extracting cells from living organisms such as plants and animals.

Speaking from outside the talks, Global Access to Medicines' programme director Peter Maybarduk said the US is not in a strong position.

"At the moment we have the US in one corner and Australia in another...and I'm amazed to say it looks like the United States may just cave."

He said the US would have a hard time getting any deal in the next 24 hours if they insisted on a mandatory eight year minimum monopoly for all countries.

"The path to a deal for the United States probably involves some kind of exceptions, a shorter period for all, or some different kinds of flexibilities."

He said the big question was what New Zealand might do if Australia agreed to a compromise with the US. 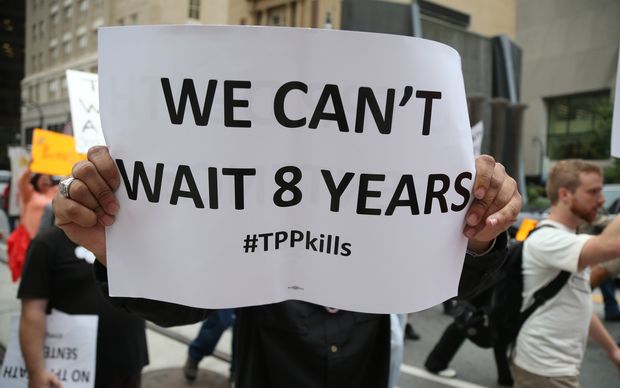 Protesters agasint TPP holding a banner "We can't wait 8 years", marching outside the hotel, where the second round of the talks is being held in Atlanta. The chief negotiators of 12 member countries moved their efforts to solve the matters remained in including patent protection for biological drugs period to 8 years. Photo: AFP

University of Auckland professor Jane Kelsey said New Zealand had been very quiet on its stance over biologicals.

"It's a bit worrying - and I know the doctors have made statements to that effect - that New Zealand has not taken as assertive position as Australia in insisting that we won't move further. The Minister seems simply to be concerned about dairy," she said.

A deal on biologics was needed before dairy is tackled, with New Zealand wanting more access to America, Canadian and Japanese markets.

Even if American and Australia reached a deal, other countries would also have to agree to it. However, time was running out. Ministers from the US, Japan, Canada, Mexico and Australia due to leave for G-20 ministerial meetings that start in Istanbul on Monday so the pressure was on to find a solution.