All the remaining tickets for Saturday night's much-anticipated Super Rugby final in Wellington have been sold.

A long queue ran all the way around Te Papa and down the waterfront, as people in the capital awaited the sale of a tranche of tickets released this morning. 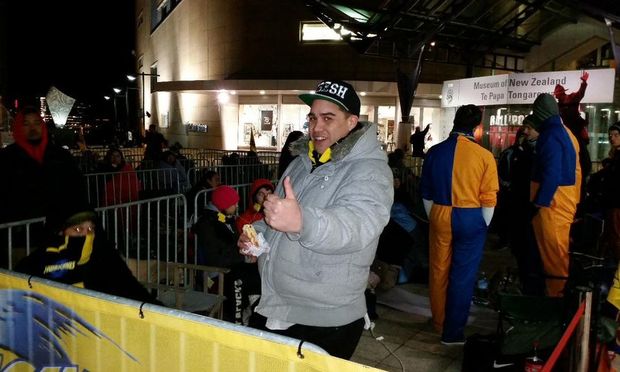 Hurricanes fan Whare Moke was first in line to grab a ticket to the final. Photo: RNZ / Kate Gudsell

The first allotment of tickets to the Hurricanes versus Highlanders match sold out in 59 seconds earlier this week, leaving many fans frustrated.

Up to 5000 tickets went on sale this morning, including 1700 that would be made up from temporary seating sections at Westpac Stadium, but Ticketek New Zealand announced that all those tickets were now sold out.

UPDATE RE #HURvHIG @SuperRugbyNZ final: Due to significant demand this morning, all tickets are now currently sold or allocated.

Two thousand had been sold at a pop-up site outside the national museum which opened at 8am.

Tickets at the pop-up site were limited to two per person, and some fans had been waiting for their allocation for 15 hours. 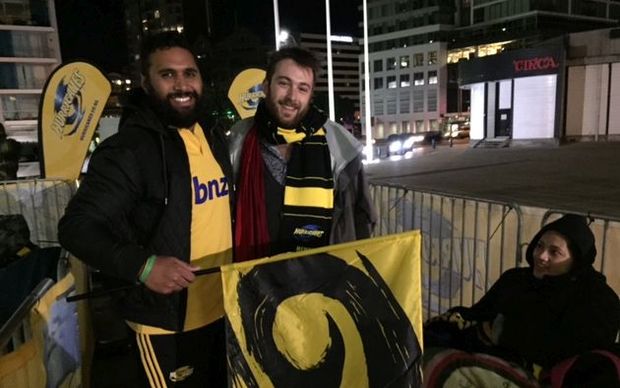 Whare Moke camped out since 5pm yesterday and was first in line.

"To everybody out here today, and stayed overnight, it's definitely with the wait," he said.

Several Hurricanes players got into the spirit of it, taking those in the queue pizza and hot chocolate.

"We had a few visits from the boys (Hurricanes players). They brought us down some pizzas and hot chocolate."

Radio New Zealand's Kate Gudsell, who was at Te Papa, said many had camped out overnight.

She said the atmosphere was good-natured with those in the queue being kept refreshed with food and hot drinks brought to them by friends during their vigil.

The temperature dropped to 7degC overnight, forcing fans to rug up in sleeping bags, woollen hats and duvets.

Fingers crossed for everyone who's braved the cold for #HURvHIG tickets. Not long to wait! pic.twitter.com/WCj9dMh8Oa

A number of tickets which were snapped up earlier this week have appeared on the online auction site Trade Me for hundreds of dollars each, causing outrage from fans who missed out.

The official price of a ticket is between $35 and $73 and there have been calls for the Government to do more about ticket scalpers.