Fans angry at scalpers have crashed an auction for tickets to this weekend's Super Rugby final with multi-million dollar bids. 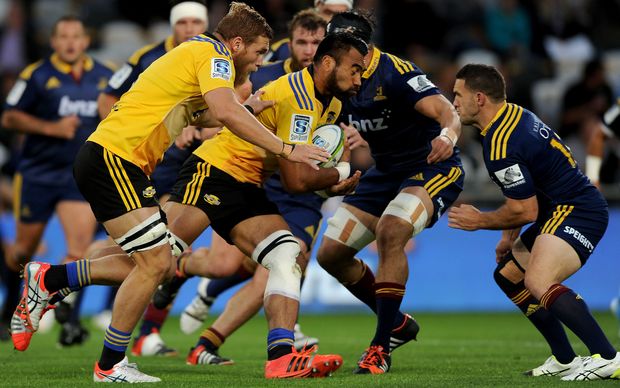 The match between the Hurricanes and the Highlanders on Saturday is the first Super Rugby final ever held at Wellington's Westpac Stadium. Photo: Photosport

The seller eventually abandoned the auction - but not before attracting a tirade of abuse, including from people who said they had missed out despite queuing online or in-person.

The match between the Hurricanes and the Highlanders on Saturday is the first Super Rugby final ever held at Wellington's Westpac Stadium, and the first New Zealand final since 2006.

Five thousand more tickets to the game go on sale tomorrow at 8am after the first 29,000 tickets sold out yesterday in 59 seconds..

Immediately, though, some popped up on Trade Me, where they have been going for hundreds of dollars each. The official price of a ticket is between $35 and $73.

The Government said it could not do much about the scalping, as it was only illegal if a game was classified as a "national event".

An event must have international reach - for example, the Rugby World Cup or the Cricket World Cup - for Cabinet to declare it a national event.

Not much can be done - Hurricanes

Hurricanes chief executive James Te Puni said everyone was aware that the tickets had been priced with the fans at the heart of the whole offer.

"No one really expected a 59 second sell out - I don't know anyone that predicted that," he said.

"This is just exceptional demand and what we are trying to do tomorrow is meet that in the best way we can."

He admitted the franchise was worried about scalping, but said there was little it could do.

"We've obviously gone out and reiterated that our terms and conditions, which are printed on the back of our physical tickets, make it very, very clear that you are breach of the commercial conditions if you resell.

"Where we have an opportunity - which is pretty hard to do, I've got to acknowledge - to prove that, then those tickets will be invalidated," he said.

"Every ticket has a barcode; it's got individual identification, so where we are able to track through the process of sale ... [but] that's not really our primary business.

"Our primary business is to sell tickets to Hurricanes games to our fans and we've achieved that."

He said the franchise has spoken with Trade Me and encouraged them to support the terms and conditions of the tickets.