Blood found on a window at the Lundy family home could have been the result of contamination, a British forensics expert has told the High Court at Wellington. 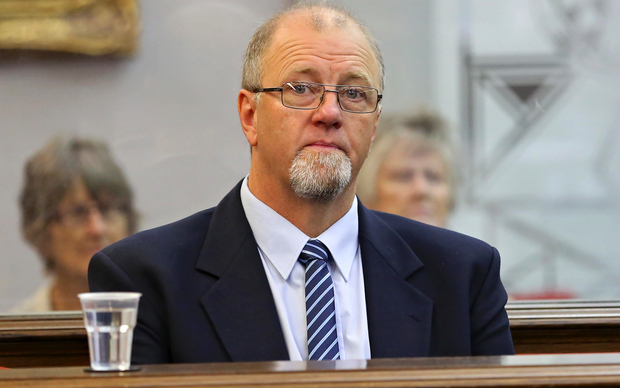 The Crown is still presenting witnesses but defence witness Gillian Leak is giving evidence today as she needs to return to Britain.

Ms Leak, a blood pattern analyst and crime scene expert, worked for the British equivalent of New Zealand's Institute of Environmental and Scientific Research (ESR) for 34 years until it closed in 2012. Cases she worked on included that of British serial killer Peter Sutcliffe, known as the Yorkshire Ripper, who was convicted of killing 13 women and attempting to murder seven others.

His modus operandi was to attack his victims' heads with a club hammer, causing brain tissue to spill.

Ms Leak, who said she had lost count of how many crime scenes she had examined where brain matter was spread around the scene, said blood found on a window next to a sliding door found open after the deaths could have come from those investigating the crime. That was because, despite it being the likely point of entry for the assailant, it subsequently became the entry and exit for investigators.

"I don't think anybody can rule that out from what's been found so far," she said.

"I think that it [the scene] has been compromised given that the door was opened when the first person arrived, that that would be an area of forensic interest because there's a good chance [the offender] would have left behind something, anything - fibres, DNA."

A video showed an investigator outside the home in a fabric overall, prompting Ms Leak's observation that science around DNA evidence had evolved so much in the past 10 to 15 years that anyone inside the outer cordon would be fully covered, including their head.

Ms Leak said it was highly likely whoever attacked the Lundys would have been "substantially" covered with blood, bone and brain tissue.

She believed that matter would stay wet enough to transfer on to other surfaces, such as the inside of car, for up to an hour after the attack.

"Whatever has been projected or directly transferred on to the person that has carried out this attack, if they have left the scene in a vehicle, you then have to think about what they've done to get into the vehicle," she said.

As well, solid matter could fall free from clothing into such areas as the boot, seat and footwell.

Ms Leak watched a video of the crime scene and pointed out that someone was carrying a bag she assumed contained equipment known as a Polilight. That Polilight was used to examine Mr Lundy's car on 1 September, and Ms Leak raised the possibility of contamination from the crime scene to the car.

However, on cross examination, Crown prosecutor Philip Morgan, QC, pointed out the finger print expert had not arrived at the scene until 31 August, and that the first use of the Polilight was on the car on 1 September.

"I assumed it and I made it quite clear that I assumed it," Ms Leak said, prompting Mr Morgan to say it was "less than desirable" for a forensic scientist to make assumptions.

He also questioned how there could have been any contamination - even if the Polilight had been at the house before being used to look at the car - when the only item found to have human tissue on it in the car was Mr Lundy's polo shirt, which was inside a suit bag; the Polilight was used only on the outside of the bag.

Earlier today, Crown prosecutor Philip Morgan, QC, asked Mr Sutherland how confident he was he had not unwittingly transferred Mrs Lundy's brain tissue from the crime scene to the Palmerston North Police Station, or from the post-mortem to the police station or the crime scene.

Mr Sutherland said he could "completely" discount that possibility, due to the measures taken to avoid such a situation, such as changing overalls, gloves and booties, and making sure he did not contact surfaces.

As well, if it had been on him it would have transferred to other surfaces before he got to his destination, Mr Sutherland said.

Mr Sutherland, who was into his fourth day of giving evidence, had previously been questioned by defence lawyer David Hislop, QC, about a conversation he had with inquiry head Ross Grantham in which he expressed concern the scene being contaminated during luminol testing.

Stepping plates - used to stop contamination - had to be removed to luminol test the floor and he was concerned some areas which showed positive for blood could have been caused by the footwear of investigators.

Mr Sutherland today said he had raised his concerns as he did not want investigators to "overly focus on those" weak footprints.

"I'm not sure how valid my concern was ... It may have been quite low but I still felt the need to voice it," he said.

Mr Hislop today asked Mr Sutherland about the possibility of the scene being contaminated by investigators not wearing suitable protective gear.

Mr Sutherland said investigators were careful to make sure their clothing did not come into contact with biological matter, by doing such things as staying on the stepping plates placed on the floor and staying away from walls and surfaces.

But Mr Hislop questioned how Mrs Lundy, who weighed 111kg, was moved from her waterbed and put into a body bag without investigators getting her bodily fluids on them.

Mr Hislop put it to Mr Sutherland that he could not discount the possibility bodily tissue had been transferred from one officer to another during the procedure.

The trial continues in the High Court at Wellington before Justice Simon France and a jury of seven men and five women.