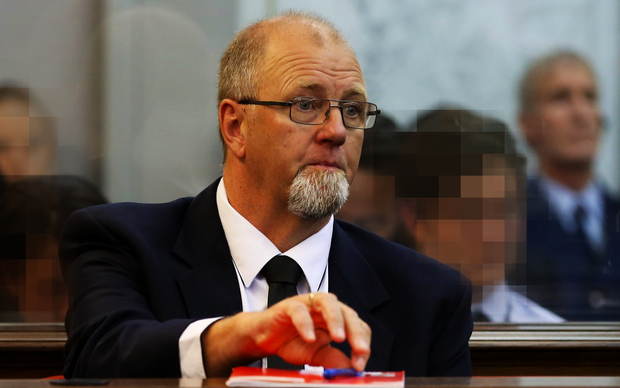 Mr Lundy, 56, has pleaded not guilty to murdering his wife and daughter, Christine, 38, and Amber Lundy, whose bodies were found in their Palmerston North home on 30 August 2000. His retrial, before Justice Simon France and a jury of seven men and five women, is entering its third week in the High Court in Wellington.

Prosecution lawyers Philip Morgan and Ben Vanderkolk started the week laying out the Lundys' financial status; they owned a $115,000 home in Palmerston North which had $96,000 owing on it and their kitchen sink business was barely solvent, never owing the parent company less than about $100,000.

Despite that Mr Lundy unconditionally bought bare land in Hawke's Bay which he planned to turn into a vineyard. The land was in two lots and totalled 44 hectares, for which he agreed to pay $2 million.

However, as the settlement dates kept passing, the penalty interest kept rising and he was given until 30 August to settle or pay $100,000 in penalty interest. The bodies of Mrs Lundy and Amber were found that day.

Week two of the trial closed with the defence trio of David Hislop, Ross Burns and Julie-Anne Kincade questioning many aspects of the Crown's case, from the methodology used to establish how many kilometres Mr Lundy travelled in his car leading up to the deaths to what protective gear the police were or were not using when they locked up and examined his car.

One officer admitted to not wearing a protective suit when he reached into Mr Lundy's car to steer it into a police garage but when he said he could not remember whether he was wearing gloves, Mr Hislop asked whether he was "doing your best to help this jury".

Another officer, trying to explain what the defence said were discrepancies in when he found a silver bracelet in Mr Lundy's car, when he showed it to a friend of Mrs Lundy's and when he recorded it as evidence, was asked if he was "making this up as you go along".

A New Zealand woman who lived in Britain in 2000 and who has name suppression told the court a family friend told her of a proposed vineyard looking for investors - the Lundys' Salu Vino venture.

She was "mostly interested in the free cases of wine" offered on the investment, and was looking to invest about £3000. Instead she received an email directly from Mr Lundy outlining what the return would be on £526,000 - about $1.75 million at the time - the amount he believed she had to invest.

The woman said she simply turned off the computer as the proposal was so far removed from her reality she did not even know how to respond to it. She did not have that sort of money, or know anyone who did - then or now.

Life insurance agent Bruce Parson said he advised the Lundys in 2000 to up their insurance from $200,000 each to $1 million; they could not afford the premiums so instead opted for $500,000 of cover each.

They signed for the new level of cover on 25 August and gave a cheque for the premium but were told the new amount would not apply until Tower had issued a policy document - something which had not happened by the time Mrs Lundy was killed.

Landowner and vineyard/orchard contractor Michael Porter negotiated the deal for Mr Lundy to buy the land for the proposed vineyard.

As settlement dates passed he gave him a final date of 30 August to pay up or lose the land and pay $100,000 in penalty interest.

Mr Porter told Mr Lundy in July of the impending deadline, and then rang him again on 28 August - two days before it.

However, Mr Lundy remained optimistic he had an investor - the woman in Britain - and asked for a bit more time.

Company director Robert McLachlan, who the Lundys were distributors for with their business, Marchris Enterprises, said all his distributors except the Lundys paid their debt to the parent company each month. The Lundys debt always stayed around $100,000.

Mr McLachlan regularly had his accountant or lawyer send the Lundys letters about their debt, and by July 2000 moved to have a debenture for $150,000 put over Marchris Enterprises.

In early January 2001, Mr Lundy told Mr McLachlan he planned to use money he was expecting from Mrs Lundy's life insurance payout to settle his debt. When that did not eventuate he tried to raise money using the house as security for a bank loan.

However, the debt remained; by 23 January 2001 it was up to $160,000 and the parent company put Machris Enterprises into receivership.

Forensic accountant Reginald Murphy said the Lundys were "probably not" solvent when Mrs Lundy was killed.

The company set up for the proposed vineyard venture, Winegrowers' Ltd, had nothing, and the Lundys had only $19,000 equity in their home.

Sergeant Danny Johanson recreated Mr Lundy's travels between Palmerston North and Petone and around Wellington to see how long the trips took, how far they were and how much petrol was used.

He was "hard driving" in the worst conditions possible; the air conditioning was on full and he was putting his foot to the floor to accelerate.

He used 76.1 litres of petrol on one trip - more than the 68 litre petrol tank in Mr Lundy's car could hold.

Police analyst Mary Ellwood said Mr Lundy's car travelled 1270km between when it was serviced on 21 August and seized on 30 August but Mr Lundy had travelled known distances of only 847km during that eight days, leaving 423km unaccounted for, Ms Ellwood said.

Defence lawyer Julie-Anne Kincade dismissed the analysis as "meaningless", saying it failed to take into account Mr Lundy's movements around New Plymouth and Palmerston North for five of those nine days.

On the opening day of the trial, the prosecution said a polo shirt seized from Mr Lundy's car was later found to have two spots of central nervous system tissue on it.

He said the car did not appear to have been wiped down when he started examining it, and that he wore protective clothing to do so.

However, the defence produced photos he admitted appeared to be of him during the examination in which he was not wearing protective gear.