Jurors deciding whether Mark Lundy murdered his wife and daughter have been left in no doubt as to the brutality of their deaths. 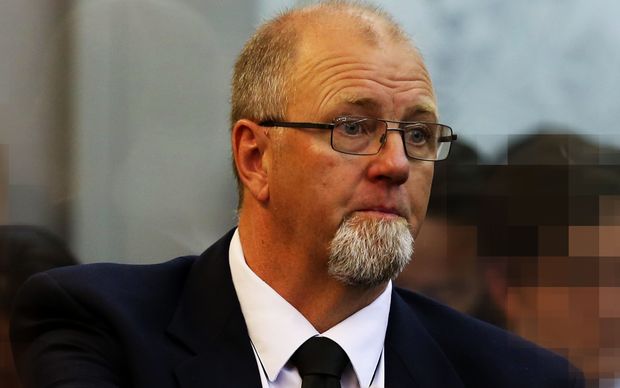 Mr Lundy's retrial, before Justice Simon France and a jury of seven men and five women, today enters its fourth week in the High Court at Wellington.

He is accused of murdering Christine, 38, and seven-year-old Amber Lundy, whose bodies were found in their Palmerston North home on 30 August 2000; they had been bludgeoned to death.

Last week, the jury saw the results of that bludgeoning for themselves when they viewed photos and a video of the crime scene, the heads of Mrs Lundy and Amber pixelated to spare them the full horror.

Justice France had warned jurors before they saw the photos that while every effort had been made to minimise their impact, "they do show the deceased as they were in the house".

Week three started with an innocuous statement read from a Palmerston North jeweller, asked to assess and value a silver bracelet found in Mr Lundy's car. It was 17.6cm long, had a knot feature and was worth about $25.

The week ended with the defence questioning why the whole Lundy house was not canvassed for flecks of the orange and blue paint found in the blood and pieces of skull washed from Mrs Lundy's body, the sheet taken from her bed and in "debris" taken from Amber's body.

The prosecution had previously told of Mr Lundy's habit of painting his tools with orange and blue paint to identify them as his own.

Rowena Collett cleaned the Lundys' house for three hours a week for three years before Mrs Lundy and Amber were killed. She said Mrs Lundy wore the trousers, while Mr Lundy as a "gentle giant".

Ms Collett told of noticing tension between the pair when she arrived to do the cleaning on 28 August, and said she "felt like I'd interrupted something".

Detective Senior Sergeant Nigel Hughes, who was in charge of control and security at the Lundys' home after their deaths, was questioned over why there was no crime scene examination strategy in place before the scene examination started on 30 August, to minimise contaminating it.

Mr Hughes maintained all personnel involved in investigating the scene had worn protective clothing, booties and gloves but lead defence lawyer David Hislop, QC, played a video to the court which showed someone in the lounge of the house - apparently watching TV - who was not wearing protective gear.

Recalled later in the week, Mr Hughes said he felt the defence had "misled" him into thinking the video was taken on 30 August; it was, in fact, a clip of a video taken by Terralink on 7 September in order to reproduce a scale diagram of the house. As well, the bulk of the forensic evidence had been gathered by then.

Mr Hughes told of seeing Amber's head and shoulders protruding from her parents' bedroom doorway, heavy blood staining on her, the floor, walls and surrounding doorway. Her mother lay naked on her bed "unrecognisable because of the injuries that she had sustained".

Police photographer David Andrews shot the 30 August video and last week told the court he wore police overalls, paper booties and latex gloves when he did so, and made sure to stay on the stepping plates laid down to protect evidence on the floor.

"I did not step off the plates at any time," he said. 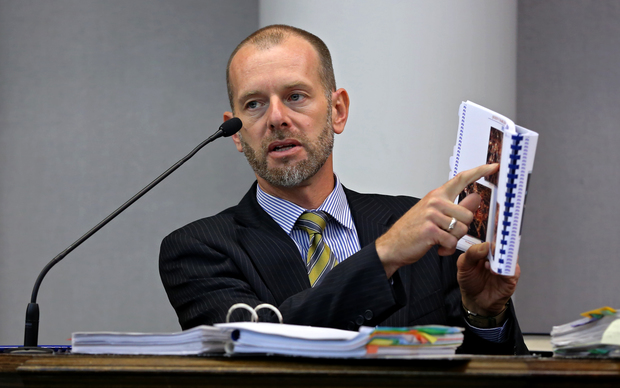 She was upright when the first blow was struck; the ensuing blows from a tomahawk-like implement rained down when she was at or near the floor, Mr Sutherland said.

Mrs Lundy had extensive head injures, as well as injuries to her arms and hands, the weapon used to inflict those injuries swung repeatedly and with such force her blood and tissue covered a bedroom wall for 3.2m.

Blood and possibly tissue was found on a wooden chopping board in the kitchen and identified as Mrs Lundy's, as was blood on the toilet wall and the kitchen floor.

Mr Sutherland said traces of blood were found in the vehicles of both Mr Lundy and Mrs Lundy's brother, Glenn Weggery. The blood in Mr Lundy's car was found to contain human DNA but none was matched to any of the Lundys.

The defence had previously questioned Mr Weggery about blood found in the boot of his car; today Mr Sutherland said blood was found but it was Mr Weggery's own. A number of blood samples found in Mr Weggery's bedroom and bathroom were examined by another scientist and the results have not yet been given to the court.

Two smears were found on a striped XXL polo shirt seized from Mr Lundy's car, one white and the other "whiteish-brown", the first 25mm by 10mm in size and the second 30mm by 20mm. The latter also had a "lump of brown substance" in it.

Both smears were examined and tested and were found to come from Mrs Lundy.

The shirt was also tape lifted - whereby sticky tape is applied to a surface to collect anything on it - and small red particles found. "Testing showed that the biological material in the sample could have come from Amber Lundy," Mr Sutherland said.

However, Mr Hislop questioned the finding of such small amounts, saying witnesses had described the crime scene as having "f***ing blood everywhere" so surely the assailant would expect to have a considerable amount of blood on their body.

DNA was found under two fingernails each of Mrs Lundy and Amber; one from each was identified as their own but that found under the other fingernails was not a big enough sample to allow for identification, Mr Sutherland said.

Mr Sutherland on Friday expressed concerns of contamination of evidence, saying stepping plates had to be removed to luminol test the floor in the Lundy house and he was concerned some areas which showed positive for blood could have been caused by the footwear of investigators.

However, luminol testing was always carried out after most of the blood samples had been collected, he said.

The trial is expected to run for at least five more weeks.