The first wave of climbers to try to conquer Mt Everest since last year's catastrophic ice falls will get onto the mountain in little over a month. 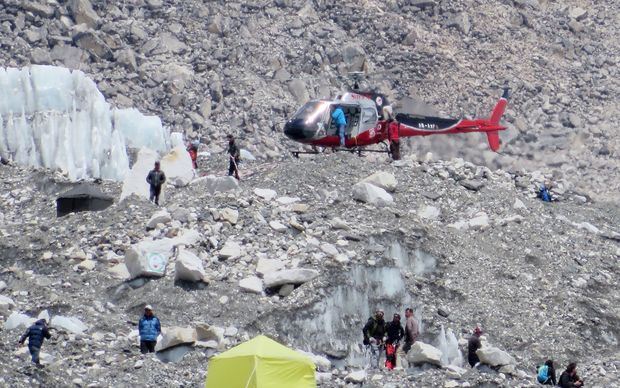 A rescue helicopter lands at Everest Base Camp during rescue efforts after an avalanche killed 16 people in April 2014. Photo: AFP

Four New Zealanders have signed up with a Wanaka company to try to conquer the world's highest peak.

They will join an estimated 250 Westerners in an assault on the mountain during the narrow window of opportunity between the end of the Northern winter in April and the start of the monsoon at the end of May.

The New Zealand climbers will be led by the veteran alpinist Guy Cotter who has climbed Mt Everest four times already.

The ascent will be the first since last year's deadly icefall killed 16 sherpa climbing guides - the worst single loss of life in expedition history.

Some of those who died were employed by Mr Cotter's company.

Their protest at Base Camp led to the cancellation of all expeditions to Everest last year.

Mr Cotter said the next wave of mountaineers will avoid the route that brought disaster to so many last year.

Mountaineers will now take a more central route after Base Camp, avoiding the Western side of the Khumbu Icefall where last year's accident occurred.

The Government of Nepal has since announced that the route from Base Camp will change from the western edge to the central part of the vallley.

It said the risk of avalanche in the left part of the Khumbu Icefall was growing and so the route needed to be avoided.

But Mr Cotter said his Sherpas had already made that decision for safety reasons anyway.

Mr Cotter added the shift to a central route did not eliminate the risk of avalanche, but made one less likely to claim a lot of victims.

He said the central route up the mountain after Base Camp was not actually new and was used by New Zealand climbers before it was changed by the Nepali Government.

The western route is understood to be an easier one for climbers to use to ascend the mountain.