A New Zealand charity founded by Sir Edmund Hillary has raised more than $13,000 so far to help the families of sherpas killed in an avalanche earlier this month. 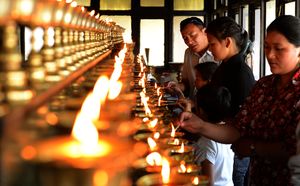 Sixteen sherpas died in the deadliest single incident in the mountain's history.

Himalayan Trust chair Michael Gill, who was in Nepal at the time of the tragedy, says it's not just the families of the dead men who are suffering financial hardship.

He says other sherpas are boycotting the climbing season.

"As I understand at the moment they are really walking off the mountain and that is a big financial sacrifice to these people because to many of these people they work for three months of the year on Everest, and they live on that for the next nine months."

Mr Gill says the trust may pool money from its appeal with funds raised by groups from Australia and the United States to help the victims' families and make the mountain safer.

Nepalese children to be vaccinated against pneumococcal disease

All Nepalese children are to be vaccinated against pneumococcal disease thanks to a decade-long campaign by a New Zealand scientist.

Head of pathology at Otago University in Christchurch, David Murdoch says pneumococcal disease is one of the leading causes of pneumonia which is the biggest killer of young children globally.

In 2005 Professor Murdoch started a campaign to get funding for research into the disease in Nepal, which has now led the government to introduce the vaccine.

He expects the incidence of pneumococcal disease to fall by 50 to 80 percent as a result.

Pneumococcal disease can result in meningitis, an infection of the blood and pneumonia.

About 1 million under-fives die from pneumonia each year worldwide.

Professor Murdoch has a long-standing connection with Nepal and is also on the board of Sir Edmund Hillary's Himalayan Trust.