Sir Edmund Hillary's son is calling for greater protection for the Sherpas working on Mount Everest, after 16 of whom died in an avalanche last week.

Peter Hillary, a mountaineer himself, says they have one of the most dangerous jobs in the world.

The guides' families are considering compensation offers from the Nepalese government but Mr Hillary says that's not enough on its own.

While financial assistance is certainly needed, he says, the job also needs to be made safer.

But Mr Hillary says it's hard to be specific about what safety changes should happen, as the introduction of new technology could also affect the Sherpas' jobs.

Another New Zealand mountaineer says his company has cancelled an expedition up Mount Everest out of respect for the Sherpa guides who died.

The deaths of 13 guides have been confirmed and three others are presumed dead, though their bodies have not been recovered.

Guy Cotter says Adventure Consultants was planning to take eight international climbers up the mountain, but the expedition is heading back to Kathmandu after dismantling its base camp.

Mr Cotter told Radio New Zealand's Morning Report programme his company worked with some of the Sherpas killed and the scale of the tragedy is extreme, affecting many in the community.

He says other international companies with which the guides worked are also keenly feeling the loss. 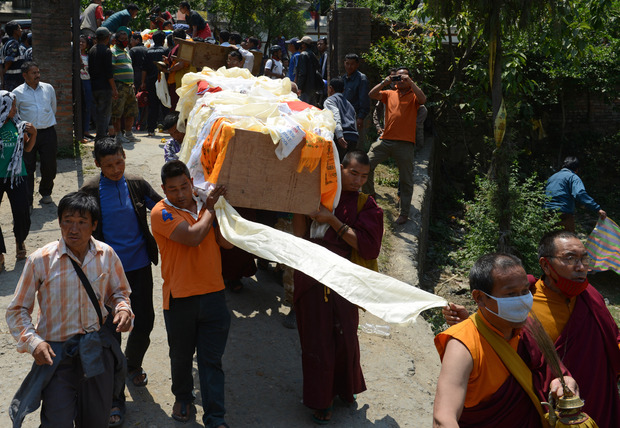 Other climbs still in doubt

Nepal's Government has agreed to some demands of the Sherpa guides who have threatened to quit working on Mount Everest this climbing season.

It will increase their life insurance to $US15,000 and guarantee schooling for the children of the 16 Sherpas who died in the avalanche last week.

The offer comes after an unconfirmed report on Tuesday night that the Sherpas had decided to stop climbing altogether this season.

Expedition leaders said tension was running high at Everest base camp after the avalanche, which has rekindled debate on the disproportionate risks Sherpas take in helping foreign mountaineers.

Some of the Sherpas had proposed suspending work for the rest of this climbing season, but others had agreed to resume expeditions this weekend.

Several expeditions - in addition to the Adventure Consultants one - have been called off.