The Labour Party is questioning Prime Minister John Key's assurance that New Zealand's attendance at a meeting of international defence chiefs in the United States is just business as usual. 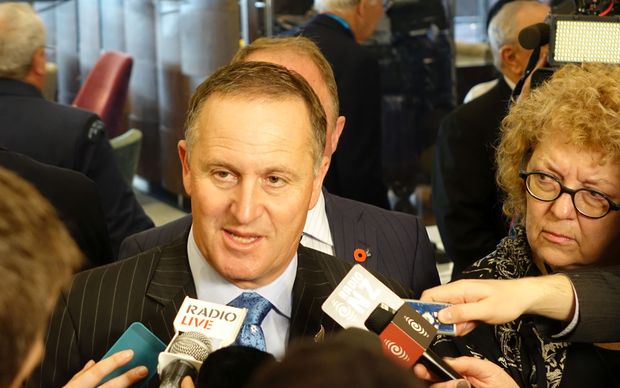 US President Barack Obama has addressed the Washington meeting, called to discuss strategies for countering militant group Islamic State in Iraq and Syria, saying he is deeply concerned by the continuing IS offensive against the Syrian city of Kobane.

John Key denies that New Zealand is part of the formal coalition fighting IS, despite being named as such by the US State Department, and today downplayed the significance of the presence of New Zealand's Chief of Defence, Lieutenant-General Tim Keating, at the meeting.

Mr Key said the meeting is a regular one, and does not signal any shift in this country's position.

"It's a regular meeting that the CDF always goes to. It's true that one of the topics of conversation will be what contribution that countries might make, although that's not the purpose of the meeting, as I understand it, it's their regular meeting."

But Labour's defence spokesperson Phil Goff said today that is hard to believe.

Mr Goff, said it was clear New Zealand was being softened up for deployment, and John Key should be honest if he is working on such a strategy.

"The Pentagon itself says that this is a meeting drawing together 22 countries to determine what military contribution they can make in the campaign against ISIS (Islamic State of Iraq and Syria). There is no such thing as a regular meeting where President Obama is present."

Mr Key was not able to say how regularly these meetings are held, or whether it is usual for them to be addressed by the US President.

While Mr Key says it is a regular meeting of defence figures, Radio New Zealand's Washington correspondent Simon Marks told Checkpoint that is certainly not the way Barack Obama sees it.

"He pointed at this meeting to the fact that there were more than 20 what he described as coalition members represented here today. He argues that there are 60 nations already contributing to this broad coalition that he says he's put together."

Simon Marks says, however, it is not clear if any of those at the meeting made any commitments in return. 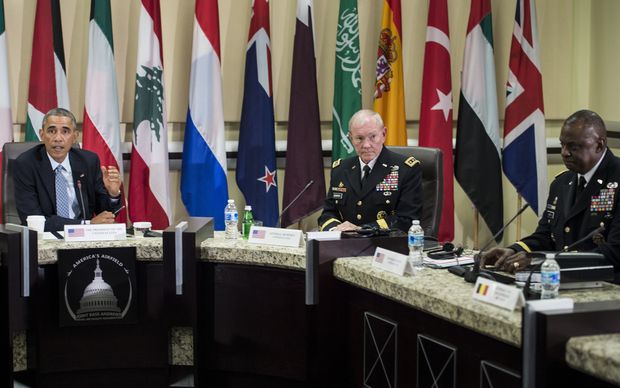 US President Barack Obama, left, with US Army General and Chairman of the Joint Chiefs of Staff Martin Dempsey, and US Army General Lloyd Austin, the head of US Central Command, following the meeting at Andrews Air Force Base. Photo: AFP

The Prime Minister said the New Zealand Government is in the process of considering what help it may be able to offer, and this meeting is part of that process and decisions will be made by the Cabinet, not the Defence Force.

John Key said Lieutenant-General Keating will be involved in a range of discussions.

"And that will allow him to inform me about what he believes is the likely contributions from other countries. All we can do is get a sense of what others are doing, what might be useful, and feed that into the mix.

"It doesn't change the decision making process we go through, and you can't, as a Government make decisions that impact our country and those who serve our country, unless you do it on an informed basis."

The Defence Force in New Zealand said commanders from various countries do meet regularly, but does acknowledge that this meeting is not what they describe as a 'normal' meeting. 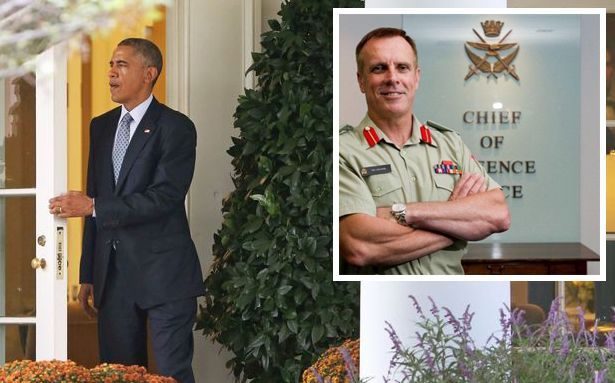 This is the first time such high-ranking military officials from so many countries have come together since the coalition against IS was formed last month.

Security analyst Paul Buchanan said the fact New Zealand has been asked to take part is a strong indication that it will be taking part in the campaign against IS.

"If it was going to be a negotiation over a potential role for New Zealand, a diplomat would have headed the New Zealand contingent, But the fact that the head of the New Zealand defence forces is there means we've already agreed to some role."

Dr Buchanan said he expects the meeting will decide on a broad plan and then individual countries will negotiate their own roles within that.

Meanwhile, the aunt of a New Zealand soldier killed while serving in Afghanistan in 2012 does not think this country should take any part in the fight against Islamic State or any international conflict.

Ani La, whose nephew was Lance Corporal Pralli Durrer, said she doesn't not believe ordinary New Zealanders would benefit from joining the fight against IS and is suspicious about the justifications Western nations are using for air strikes in Iraq.