Conservationists are warning those fishing for trout not to eat their catch from areas where the poison 1080 has been used to kill pests. 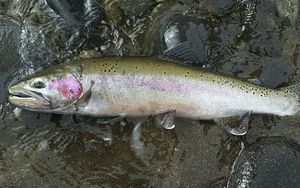 Trout take small amounts of 1080 into their flesh after eating mice poisoned by the product. Photo: Photo NZ

Research commissioned by the Department of Conservation has revealed trout take small amounts of 1080 into their flesh after eating mice poisoned by the product.

Chief executive Lou Sanson said while the levels exceeded the standards set by the Food Standards Guideline, the risk to humans was very low.

"The standards are incredibly cautious by the food safety authority and we respect that, there is some residual 1080 in the fish, but you'd need to eat many tonnes of trout to have any effect."

"So until further notice our advice on this is don't eat trout from those particular areas."

Both organisations said further research is needed to accurately assess the risks.