A report into the deaths of two cattle after an aerial 1080 poison drop in the Waitomo district in May has found that all 32 resource consent conditions had been complied with and that there was no unlawful discharge of a contaminant onto land or water. 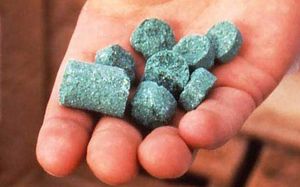 Pellets of 1080 used in conservation work. Photo: FOREST AND BIRD

The two cattle, part of a mob of 36 stock, wandered into a 1080 area after forcing their way through an unsecured gate.

Waikato Regional Council Investigations Manager Patrick Lynch said while it was accepted the cattle probably died from 1080 poisoning, the actual cause of death has been inconclusive.

"There's been autopsy, pathology and toxicology done on the dead animals. Unfortunately that's been somewhat inconclusive.

"However, when you look at the overall circumstances of the fact that the stock were exposed to 1080, and the way by which they have died some 48 hours after that exposure, or after that likely exposure, and the absence of any other cause of death, it's more likely than not that they ingested 1080."

Mr Lynch said farmers had been alerted to the 1080 drop beforehand and the cattle should not have been there.

"The stock have made their way through there across land, across a river and into that bush area. I mean, in some respects, it is just like stock getting out on to roads and either been hurt or killed (after being hit by a vehicle) exposing themselves to danger.

"I suppose, really, the message to get out of this is around securing stock and keeping them safe."

He said there were several hundred metres between where the stock should have been and the 1080 drop.

Farmers asked to ensure fences and gates are secure

Meanwhile, police are asking farmers to check the state of their fences and gates after a series of accidents caused by livestock on roads.

Last week, police had reports of at least 13 incidents, including cows, sheep and goats and a deer on state highways in the Waikato region alone.

Two people were seriously injured after collisions with cows.

Owners of livestock involved in an accident on the road may be held liable if their fences are not up to standard.

Police and farmers are also asking motorists to report damage to fences.