Security experts say the risk of a home-grown terrorist attack in New Zealand can never be eliminated, but agree with local Muslim leaders that open dialogue is the best defence. 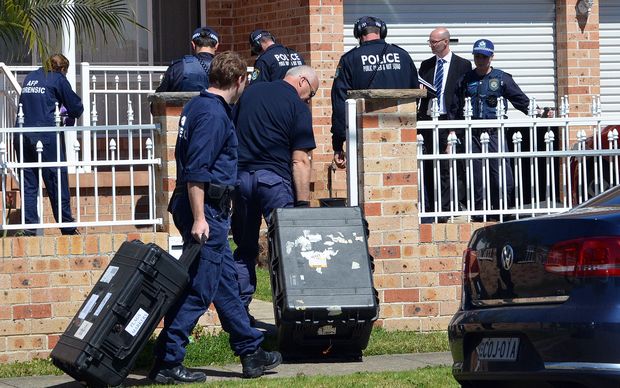 Forensic experts collect evidence from a house in Sydney a part of Australia's largest ever counter-terrorism raid. Photo: AFP

In Australia, mass raids yesterday foiled a plot inspired by a former Sydney bouncer turned Islamic State leader, who's been inciting followers online to kidnap and behead a random member of the public.

He said the best way to counter the threat was to ensure society is inclusive.

"Often those who pick up on extreme ideologies are young and disenfranchised and winning hearts and minds is very very important."

Director of the Centre for Defence and Security Studies at Massey University, Professor Caroline Ziemke said it was impossible to completely rule out a terror attack by a lone madman or a small group of radicals.

"But at the risk of sounding smug or naive, I don't think we have the same risk as Australia because of the temperature of political dialogue.

"We don't have the same strident political debates at national levels, the calls to 'Stop the Boats', which is really a dog whistle playing on fears about the growth of migrant communities, particularly Muslims.

"It's really hard to imagine someone being accused of being 'un- New Zealand', that would be alien to most New Zealanders."

Professor Ziemke said inclusiveness was not just important to combat the rise of violent extremism, but encourages communities to come to the authorities when something is going on.

President of the Federation of Islamic Associations Dr Anwar Ghani said the Muslim community in New Zealand had a good relationship with the authorities and he was confident there's no grounds for extremism to flourish.

Dr Ghani said Muslim leaders in New Zealand condemn terrorism and it's not part of Islam.