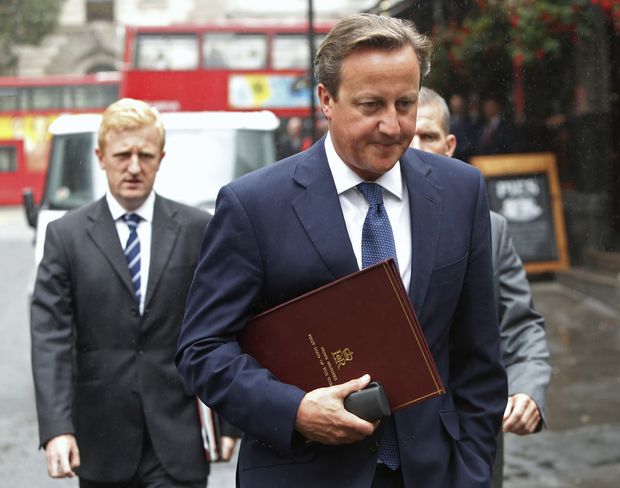 It was "abhorrent" British citizens had "declared their allegiance" to groups like Islamic State, he told MPs.

He said the inability to stop British terrorists returning home from overseas was "a gap in the armoury" but only pledged cross-party talks on the issue, the BBC reported.

Powers to monitor suspects in Britain will also be strengthened.

In a statement to Parliament, Mr Cameron restated Britain's backing for US airstrikes against Islamic State militants in Iraq and said he would not rule out participation in similar action in the future.

Britain's terror threat level was raised to "severe" from "substantial" on Friday.

Mr Blair told MPs that developments in the Middle East over recent months had major implications for Britain's security, with 500 British nationals estimated to have travelled to Iraq and Syria to fight on behalf of Islamic State and other militant groups.

He said the whole world had been "sickened and shocked" by the killing of American journalist James Foley, and other atrocities in Iraq.

While rejecting calls for "sweeping and blanket" new laws in response, he said a "forensic focus" was needed to prevent people from travelling abroad in the first place and to deal with British jihadists returning to Britain from conflict zones.

The home secretary already has executive powers to seize the passports of those travelling abroad in certain cases but Mr Cameron said the police needed greater discretion to act where needed.

"We will introduce specific and targeted legislation... providing the police with a temporary power to seize a passport at the border during which time they will be able to investigate the individual concerned," he said.

Mr Cameron said Britain was able to block foreign nationals and those with dual citizenship from re-entering the UK but did not have the same power for British nationals deemed to pose a threat to the country.

Under his proposals, British nationals suspected of being involved in terror acts would be allowed to keep their British citizenship, but they would be prevented from re-entering Britain for a period of time.

He added: "Adhering to British values is not an option or a choice. It is a duty for all those who live in these islands so we will stand up for our values, we will in the end defeat this extremism and we will secure our way of life for generations to come."

Prime Minister John Key said New Zealand would take any necessary steps at the border, if it believed there was risk of potential terrorists returning from the likes of Iraq or Syria.

After British prime minister, David Cameron, announced plans to confiscate the passports of suspected Islamist militants to combat the threat posed by radicalised Britons, Mr Key said he could not rule out a similar threat here.

He said the law already allowed the Government to confiscate passports at the border, in certain circumstances.