Security at the Australian parliament in Canberra is being beefed up in the wake of counter-terrorism raids which foiled a terror plot. 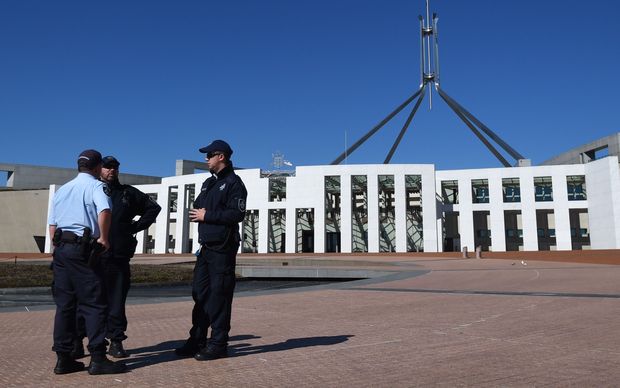 Australian Federal Police officers are seen outside Parliament House in Canberra, after 'chatter' about a possible terrorist attack Photo: AAP

Australian Prime Minister Tony Abbott said while the whole country is at risk of an attack, some of the intelligence has been more specific.

He said there had been 'chatter' among those networks that he and other Government officials, along with Parliament House in Canberra, are potential targets.

As a result federal police will now take over security both inside and outside Parliament House.

Police are concerned that young Australian Muslims are being targeted for radicalisation by members of the Islamic State after a violent plot was foiled.

A Sydney man is in custody, accused of plotting to behead a random member of the public in what prosecutors said was a plans to shock, horrify, and terrify the Australian public.

Omarjan Azari, 22, is one of 15 people detained when 800 police raided homes in Sydney and Brisbane on Thursday.

Australia's Acting Federal Police Commissioner Andrew Colvin said Mr Azari was the ringleader of a larger group. He said the young age of those under investigation is of particular concern.

"We've seen the reach of ISIL, the reach of the conflicts into countries like Australia, into our communities. It's quite strong and it's concerning."

The ABC reports the man behind the plot is believed to be Australia's most senior Islamic State member, Mohammad Ali Baryalei. It's understood he called contacts in Australia and directed them to carry out a campaign of random public beheadings in Sydney and Brisbane.

"We'll continue to collect evidence, we won't stop here. This is the first of a new phase of the investigation and we do anticipate further arrests and further charges."

Fears of a backlash

Islamic groups fear the arrests could prompt a backlash.

About 200 people from Sydney's Muslim community held a protest against the raids outside Lakemba station on Thursday night. 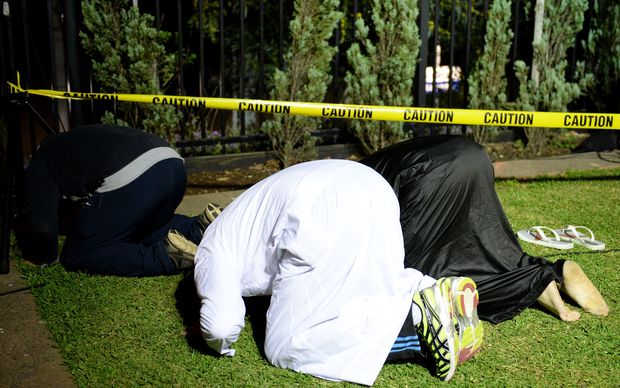 Members of the Sydney Muslim community pray prior to a rally against counter-terrorism raids Photo: AAP

The group heard claims of police brutality and political hysteria, and the speakers included children who said they witnessed one of the raids. One said he and his mother were assaulted.

Uthman Badar from the Islamic Hizb ut-Tahrir movement said the Muslim community was "not new to these sort of heavy-handed raids", which he described as "politicised counter-terrorism".

However, Muslims Australia vice-president Ikebal Patel said the terrorism threat was a reality.

"We actually have to deal with that and the Government has to deal with it in a fair manner and a just manner," he said.