The centenary of New Zealand's capture of Samoa from Germany has been commemorated at a national service in Auckland this afternoon. 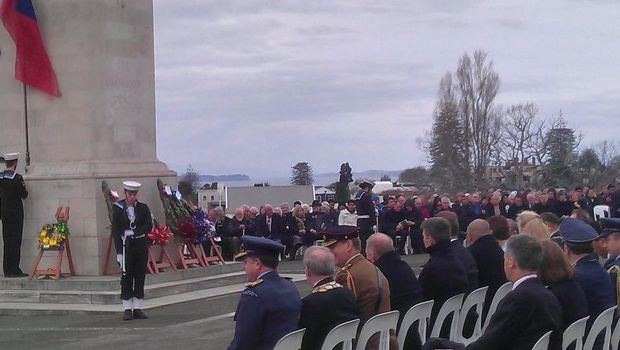 The centenary of New Zealand's capture of Samoa from Germany on August 29, 1914, is commemorated at a national service at the cenotaph at Auckland's War Memorial Museum. Photo: RNZ / Karen Mangnall

The centenary of New Zealand's capture of Samoa from Germany has been commemorated at a national service at the Auckland Cenotaph on Friday.

The military occupation of Samoa on August 29th, 1914, marked New Zealand's entry into the First World War and the start of a relationship that has transformed both countries.

The director of the Auckland War Memorial Museum, Roy Clare, said since that difficult time Samoa has made a huge contribution to New Zealand.

Auckland is now the largest Samoan city and Samoan is the second most spoken language.

"So in a very real sense, from those days of a necessary occupation for a world war a long way away, we welcome the extraordinary changes and progress, and the occupation of this beautiful city by Samoa."

Among the several hundred guests at the service were descendants of the 1400 New Zealand military party that landed in Apia, and of Samoan and German families there at the time.

Speaking at a reception after the service the Governor-General acknowledged New Zealand's role in Samoa hadn't always been positive.

"Nevertheless, as we look back over the past fifty two years, New Zealand and Samoa have grown ever closer together," he said.

"Our strong bonds are also reinforced by people-to-people relationships and the nearly 145,000 New Zealanders who enjoy Samoan heritage."

He said Samoans have made an extraordinary contribution in sports and have contributed a distinctive voice to New Zealand through culture and the arts.

Samoa also held a military commemoration of the capture at sunset.