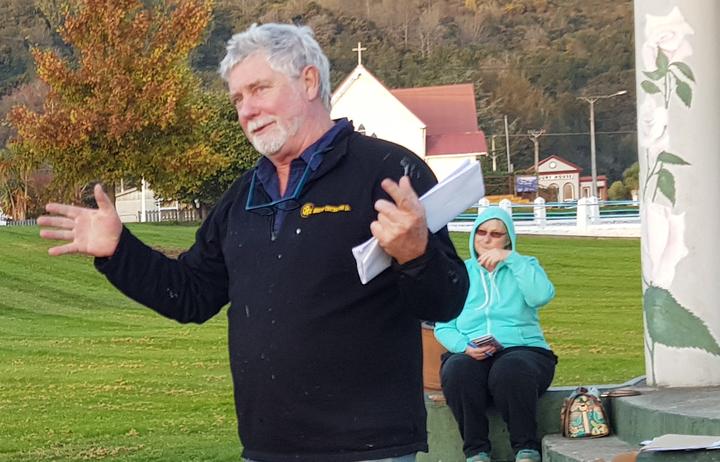 Inangahua Community Board's chairperson John Bougen says he is devastated with what is happening in his town because of people refusing the Covid-19 vaccine. Photo: Lois Williams

John Bougen told Tuesday's board meeting that Covid-19 vaccination statistics show Buller is the worst performing district on the West Coast, largely because of people refusing to take the vaccine in Inangahua.

"I personally am devastated at what has happened in town as a consequence of this," Bougen said.

"When you go and look down the main street today, normally it's bustling but the tearooms have lost so many staff they can't actually open Mondays and Tuesdays and they're going to rationalise their staff on the rest of the days."

Reef Cottage had also lost staff who had refused to be vaccinated and was going to be closed on Tuesdays and Wednesdays, Bougen said.

Wilsons Hotel had lost its chef for the same reason, leaving only Dawsons and the Reefton Hotel providing evening meals.

"Worse still, not only have the staff gone but the employers have to pay them four weeks to bugger off and bugger up their business."

Bougen predicted the loss of those services would hurt Reefton and the visitor industry.

The town's ambulance services had also been hurt by the refusal of staff to be vaccinated against Covid-19, Bougen said

"Despite what's been said [by St John], there were 11 volunteers, and two of them handled 80 percent of the calls.

"Those two have decided not to offer their services because of their vaccination status and we've now got five volunteers who used to help occasionally, having to do 100 percent of the calls.

"My statement still stands - that if you get sick in the middle of the day, good luck. A nurse will come out in a car, but you may not get the ambulance."

Reefton Hospital had also lost staff who were unwilling to be vaccinated, he said.

"It is an appalling state of affairs and I just hope and pray that at some point sense will prevail and people will go and get at least one jab so that we can get through January, and if they don't, then Reefton will suffer."

Social service providers in Reefton were invited to meet with health officials yesterday to plan how to monitor and support people who catch Covid-19 in the coming months and have to isolate at home while sick.

But the meeting was cancelled at short notice because of a lack of registrations.