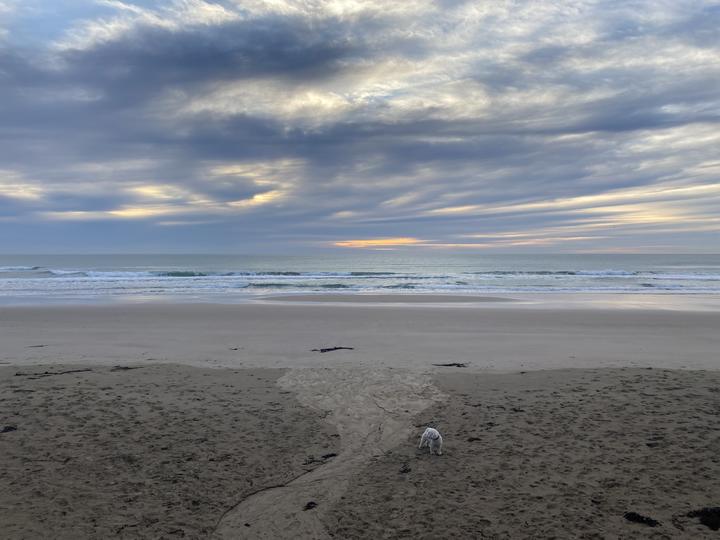 Residents were walking dogs along Wainui beach about 7.30am today, prior to alert messages telling people to stay away from the water. Photo: LDR / Alice Angeloni

The 5.20am alert said they no longer needed to evacuate for a tsunami threat, following an earthquake that struck at 2.27am off the North Island's east coast, 105km east of Te Araroa.

That was the first alert message Gisborne residents received. Residents between Cape Runaway and Tologa Bay received an earlier alert. 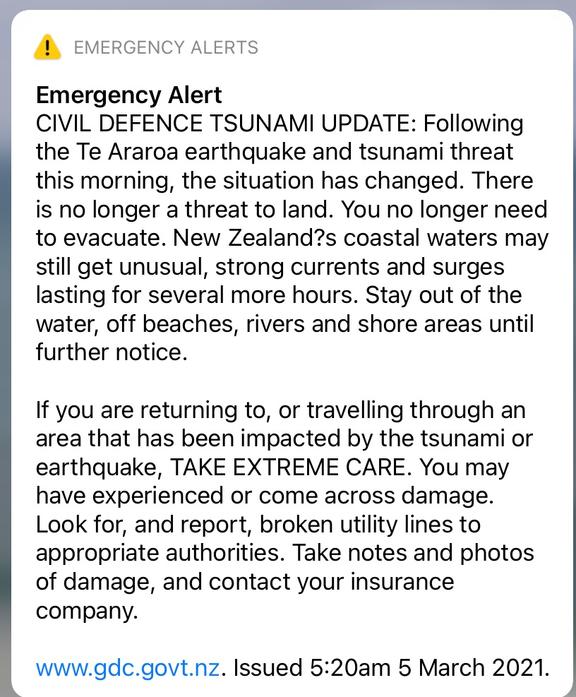 The alert that came through to phones in Gisborne at 5.20am told residents they did not need to evacuate. Photo: LDR / Alice Angeloni

Some have called communication from local authorities following the earthquake slow, and a "system failure", while others say they were left in the "grey" not knowing if they should evacuate.

"The first warning that people get will not be from official sources, it will be from the event itself, what we call natural warning and that is the reason for the 'long, strong, get gone' advice.

"We don't want people to wait for official advice, we want them to act, and they did that, that's brilliant, and then we backfill with official information when it comes to hand."

The first alert message was only sent to those most at risk of tsunami - from Cape Runaway down to Tolaga Bay, Ball said.

"The emergency mobile alert went to the areas where there was a life risk because that's what that channel is for.

"People around the Bay of Plenty or in areas for which there was a beach or marine threat, we didn't send them an EMA [emergency management alert) because they didn't have a life threat."

However, Gisborne residents were included in follow-up alert messages this morning, warning people north of Tolaga Bay to evacuate after a magnitude 8 earthquake near the Kermadec Islands had the potential to cause a "life-threatening" tsunami.

Wainui resident Jennie Harre Hindmarsh said she had evacuated three times in the past in response to tsunami threats, but did not this morning.

"It's quite a big thing for older people and people with families to head to the hills," she said.

"We have so many of these earthquakes here where it's a grey situation, head to the hills or not. I've lived here for 16 years right on the coast, and every time we have this communication confusion where you're hunting around for where you can get the information and it takes a while to find out where you're going to get the first piece," she said. 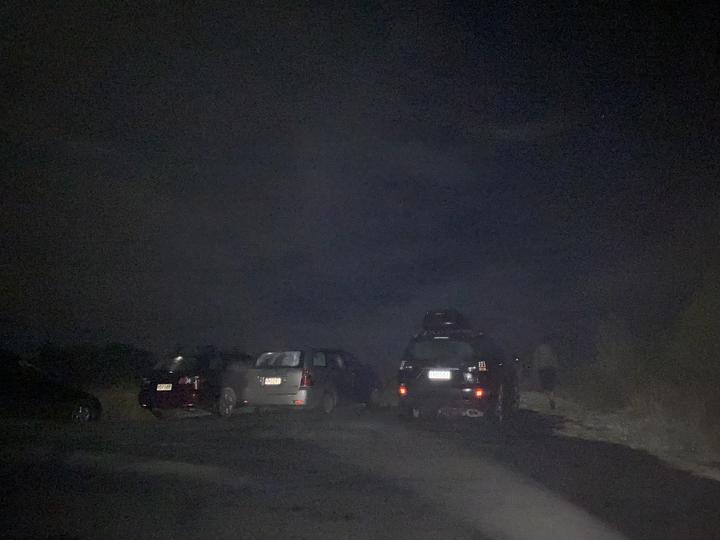 Cars took to higher ground in Okitu near Gisborne about 3.30am on Friday. Photo: LDR / Alice Angeloni

Harre Hindmarsh, along with other residents online, called for the return of a Civil Defence Facebook page in Tairāwhiti that provided prompt updates.

"The minute it had happened they would be on the Facebook page giving us information," she said.

She believed there needed to be one prompt messaging system across local and central government, like there had been during Covid-19.

Makaraka resident and former journalist Roger Handford, near Gisborne, said he immediately went looking for information following the earthquake but found the process had revealed the "woeful inadequacy" of communication from local authorities.

"Within minutes the US Geological Service posted a possible tsunami warning, but it was more than half an hour before any mention appeared on any official New Zealand website," he said.

An hour later Civil Defence was carrying a "tsunami threat being evaluated" message - and that did not change until later in the morning, he said.

The front page of the council's website carried a "no current emergency" tag and the tsunami alert again did not appear for some time, Handford said.

"When an event like this happens, people should not have to go hunting for information. It should come to them.

"If we can do the Covid thing, why can't we deal with an earthquake in a much better fashion, when people are much more alarmed?

"We have had a year being bombarded by all sorts of advisory messages thanks to the Covid crisis.

"Surely a large earthquake is an equally life-threatening event for which citizens need speedy and accurate advice, with the cellphone being the most obvious first method?

"There is an urgent need for Civil Defence and local council to get their act together and set up a modern alert and advisory communication system that works - especially in the middle of the night."

Other residents took to social media to voice their frustrations.

"What is the point of the cancellation alert when we didn't receive the alert in the first place?" one Facebook commenter said.

Another said they were lucky to have had family who phoned to alert them, and friends from overseas.

Mayor Rehette Stoltz said in a statement this morning she was heartened to see so many people knew what to do when the earthquake hit.

"We know that many got in their cars and self-evacuated without waiting for an official word. The 'long or strong be gone' message seems to have got through."

"Council takes its advice from NEMA as the official source of information, and sometimes there is a delay as they do assessments and make those decisions, but we want people to move quickly."