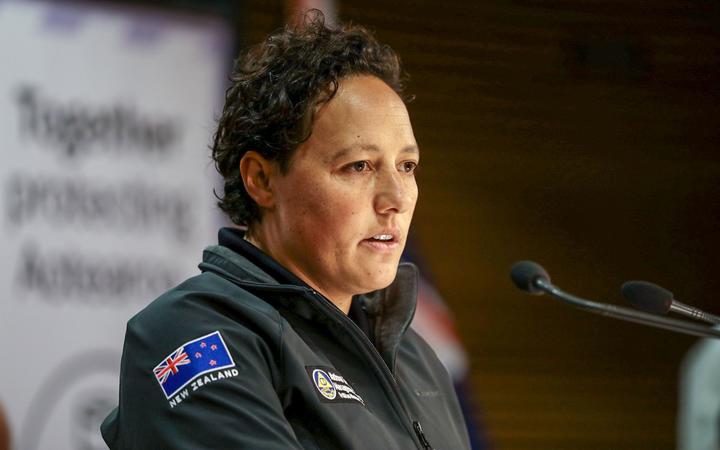 Allan said the evacuation warnings may need to stay in place until sometime this afternoon.

She said the messaging was when it is long or strong, get gone.

"We saw New Zealanders literally adhere to that advice, they knew to grab their bags.

"This has been a dynamic event, it is constantly evolving." 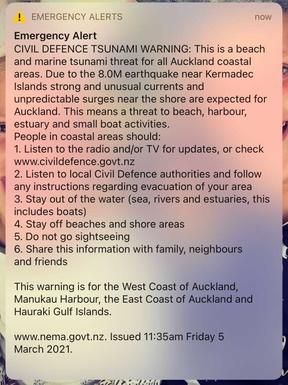 An emergency alert was issued for all Auckland coastal areas for a beach and marine threat at 11.35am. Britomart Train Station in central Auckland has been temporarily closed due to the possibility of flooding, with Auckland Transport saying the high tide due shortly could be an issue. It is due to open again at 3pm.

Allan said all of Opotiki has been evacuated.

"People have done the right things in the regions by picking up and packing up and staying calm."

She thanked all of those who have been affected.

Allan said they were asking those who have moved to high ground or inland to remain where they are, until the official all-clear has been given.

National controller Roger Ball urged people not to go sight-seeing in coastal areas. He said the first wave may not be the largest.

"The severity of currents and surges will vary over the period this morning that the warning is in effect for.

"Tsunami activity will continue for several hours and the threat must be regarded as real until this warning is cancelled."

Ball said strong and unusual currents and unpredictable surges near the shore may be expected in other parts of New Zealand.

"We're advising to play it safe. Stay off the beach and out of the water.

Follow any instructions regarding evacuation of your area, he said.

GNS scientist Bill Fry said there was no way today's earthquakes could have been predicted.

He said the first one came this morning without any significant warning.

Fry said he could comment on how the first and the last earthquake are related. The second one was bit more tenuous.

"When we have a big earthquake like the first one at 2am this morning we know in the region it's very proximal to that earthquake - the nearby region it's highly likely to have another earthquake, usually that's not bigger than the first which is what we've seen today but it does happen."

Fry said he has been in NZ for 13 years responding to large earthquakes and tsunamis and this is the first time this particular sequence has happened.

Allan said the warning system that went out this morning was targeted at those areas where there may be risk to life. It was expanded over the day.

"The advice we've received is that the warning system is adequate.

"The NEMA system doesn't operate in isolation, it requires people to carry that information."

She said the media helped in spreading that message.

People on the grounds seemed to have understood the messaging, but there will be ongoing reviews, she said.

Sirens are operated by local Civil Defence and management groups and local councils.

Multiple tsunami warnings have been issued by Civil Defence this morning after a 8.1 magnitude quake near the Kermadec Islands.

It is the third earthquake this morning following a 7.4 quake near the Kermadec Islands earlier, and a 7.1 quake off New Zealand's east coast.

It is telling people near the coast from the Bay of Islands to Whangārei, from Matata to Tolaga Bay, and Great Barrier Island must move immediately to nearest high ground, out of all tsunami evacuation zones, or as far inland as possible.

The National Crisis Management Centre - or Beehive bunker - has been stood up in response to multiple major earthquakes and tsunami warnings.

The Officials Committee for Domestic and External Security Coordination - a high level committee brought together to respond to serious security events has not been stood up at this stage - but is ready in case it needs to.