Pensioners living in Ōpōtiki's Peria House flats say a $25 a week rise in rent will be a struggle to pay and will result in them having to go without. 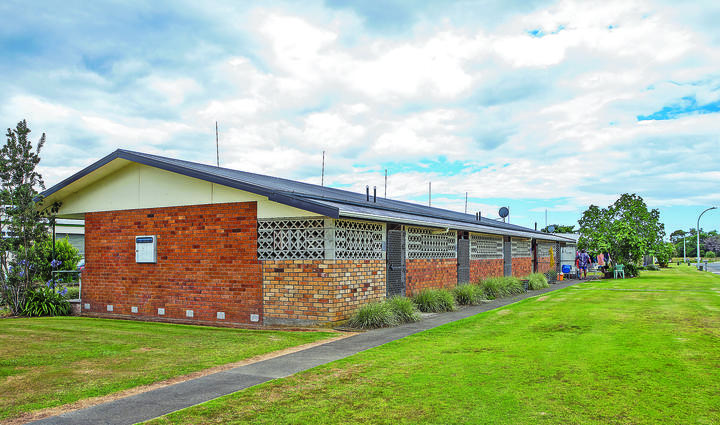 Years of underinvestment has seen a lot of maintenance done on Ōpōtiki's Peria House flats with a corresponding rent rise of $25 per week. Photo: Whakatāne Beacon / Troy Baker

However, the society that owns the flats says although it is unfortunate, it is inevitable following years of underinvestment by previous owners.

The 20 pensioner flats at Peria House were originally owned by the Ōpōtiki District Council and have since been managed by several charitable trusts. They were designed to be an affordable option for those on a fixed income but now house people in paid employment too.

Most of those living in the flats said it would be a struggle to pay rent, however, none wanted to be named as they were worried they would be forced to leave and there is nowhere for them to go.

One pensioner said he had lived in his car for six months before a flat became available at Peria House. If he lost the flat, he would be back in his car. He said the rent rise was a "hell of a shock".

Other pensioners said the rent rise was a "hell of a lot", they didn't see it coming, and they were "furious".

However, all said they did not have a choice but to pay as they suspected other places would charge far more.

One man living in the complex said although he would be "all good for now" as he had a job, when he fully retired the rise would make things tight.

He said when that happened, he expected he would have to move in with family, who were already crowded.

"What else can you do though, there's an expectation you'll be able to find more money," he said.

All of those spoken to were pleased with the condition and maintenance of the flats.

Chair of Peria Society Gloria Lewis said there had not been much maintenance done on the flats since 2016 and the society had to do a lot of work to get them back to standard.

She said it aimed to keep rents modest, but sustainable. The highest rent is $160 a week.

Lewis said the society made no profit from the housing and the board had been part-funding it for some time but could no longer do so.

"Quite frankly they weren't up to snuff," she said.

"The reality is since we took back over, we've spent a lot of money on maintenance and we're trying to keep really good quality, modest flats available."

Work on the flats has included new vinyl, new paintwork, new carpets, security lighting and raised vegetable gardens. The society moved tenants into alternative housing while their flats were done up.

Lewis said in the past financial year rates also went up 14 percent, insurance went up 39 percent, and several of the flats had also needed to be completely refitted after renters trashed them. The society is also looking at building a fence around the flats to improve security.

"In some years, we have spent more on maintenance than we receive in rent, without even taking rates and insurance into account," she said.

"In the past, rents haven't risen in line with expenses. We are trying to keep rents as reasonable as possible."

Lewis said the society had kept the rent as low as possible while still ensuring all expenses were covered.

The rent rise comes into effect from January.