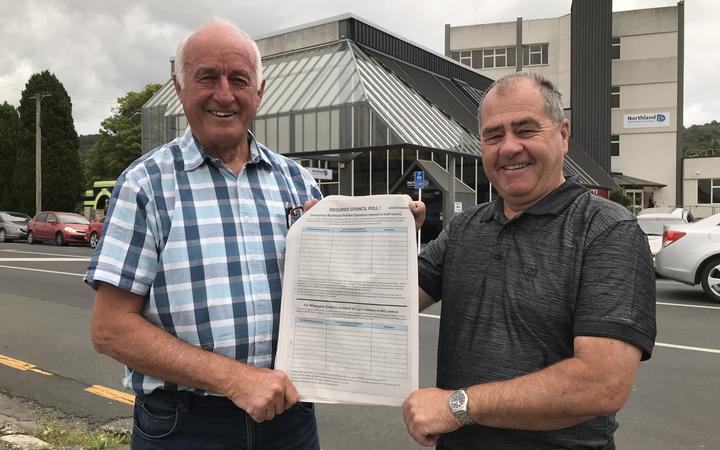 This was done through a first full page advertisement in the Northern Advocate daily newspaper on Wednesday.

The long-time NRC councillor and former deputy chairperson spearheaded setting up Democracy Northland after resigning on the spot and walking out of the council's 20 October meeting.

He did so over what he called 'broken democracy', exiting just ahead of a 7-1 vote for the constituencies. That departure came after he had initially tried - but failed - to get the council to instead initiate a poll of its ratepayers first.

Northland's three councils are part of seven nationally that this year decided in the wards' favour. It's the only region where all its councils voted on the wards at the same time.

Democracy Northland is running a coordinated regional campaign calling on electors to individually sign up to two separate countermanding petitions against these decisions - one demanding an NRC poll, the second demanding the same of their local district council.

Bain said the group was aiming for 6500 electors' signatures for the NRC petition, 3500 for the WDC petition and 1000 for KDC's.

Under the Local Electoral Act (LEA) a total of 9897 electors' signatures is required for the Democracy Northland petitions to be valid.

Polling results are binding on councils and consistently overturn Māori wards. This has happened with all but one New Zealand's most recent nine polls nationally.

Bain said he expected to lodge the petitions before the end of the year.

The polls must be demanded before 21 February to be in time to affect the next local government elections in 2022. After that date would mean affecting the 2025 elections.

Former ACT candidate and Poroti orchardist/farmer Robin Grieve is lead WDC petitioner against the council's 8-6 majority Māori wards decision on 3 November. He lobbied the council against their wards establishment in the lead-up to that decision.

Grieve said one person was at the crux of New Zealand democracy's implementation.

"Whangarei District Council's decision on Māori wards should have been put out for a poll first (to see what electors thought of this)," Grieve said.

Craig Jepson, a Mangawhai concreting contractor and developer is lead KDC petitioner against the council's 28 October 7-0 (with two abstentions) decision for a Māori ward.

Jepson stood for KDC at the last three local government elections, missing out by 10 votes in 2019. He said polling was about ratepayers having their say, rather than councillors making decisions on Māori wards without consultation.

"It's a democratic thing. We need to have a say as ratepayers, particularly in Kaipara where we're often bulldozed without that chance to have a say," Jepson said.

"We believe this is wrong and that changes of this magnitude should be decided by referendum of voters."