Masterton's iconic tractor and bulldozer will stay at the town's Kids Own Playground - for now. 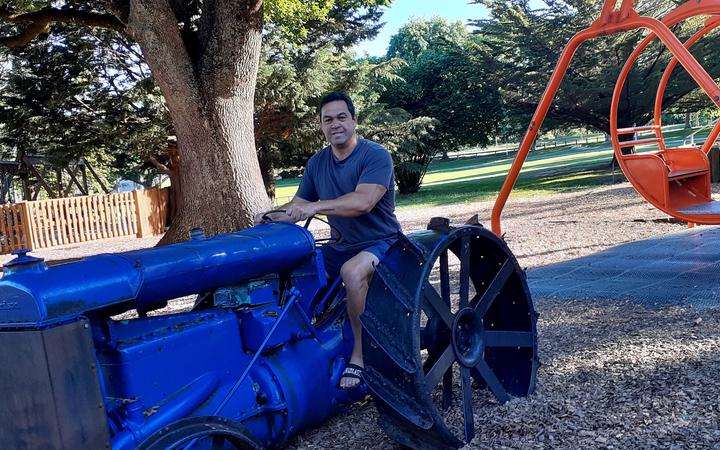 Masterton local Joe Potangaroa says he grew up using the tractor and now his children play on it. Photo: Joseph Potangaroa / via LDR

Much like the Civic Centre decision in February, the vehicles have earned a stay of execution as staffers are sent back to work out further options.

A move to protect the vehicles in the short term won the day by six votes to five.

Patterson chaired the meeting at the council's Waiata House chambers in the absence of Bex Johnson.

The decision paper was put to the committee to follow up a November 2019 report by specialist Tina Dyer.

As well as the vehicles, a flying fox at Burling Park has also been earmarked for closure as part of a programme of work to safeguard district playgrounds.

"No one is showing any pride and joy in bringing this paper in front of you."

The severe penalties for rule-breaking were spelled out.

The Health and Safety at Work Act 2015 allows for a five-year prison term or a $3 million fine for "reckless conduct in respect of duty that exposes an individual to a risk of serious injury, serious illness or death".

Deputy Mayor Graham McClymont was one of the strongest voices around the table in favour of removal.

McClymont said if it was up to him, they would be "gone tomorrow".

"As an employer of 10 people in a fairly dangerous industry, I understand health and safety."

The council had approached other engineers who were reluctant to repair the machinery for play use.

Gare said he had approached engineers with a view to safeguarding the equipment, but agreed with the report that it was a "grey area".

Both held fond memories of family time at the playground, but spoke of the need to balance legislative requirements.

Rangitāne o Wairarapa Iwi representative Te Tau spoke of the battle between "compliance and legislation, and the heart".

She said she had grown up playing on the vehicles, and they brought a feeling of nostalgia.

Nixon, who had a background in playground design and injury prevention, said most injuries in playgrounds were "from equipment that meets the standards".

"There's some real challenges and juxtapositions here around what we see as risk and what has been deemed by the government."

Nixon and Gare both said that it would cost members of the public hundreds of dollars to get a copy of the relevant standards.

Patterson said the report had provoked an emotive reaction but the requirements left MDC in a difficult position.

"I love those pieces of equipment. My kids loved them, my grandkids love them, in fact my husband remembers them, which shows how old he is.

She said the potential replacements were "heavily plastic and artificial-looking".

"But at the end of the day, there's equipment there that does not meet standards.

"And this council from a health and safety perspective, we've been made aware of this. We can't insure our way out of it and we are at risk.

"The emotion tied to this is about the iconic nature of these pieces."

Should the recommendation have passed, consultation with the public was set to have opened immediately.

Council staff will now bring back another paper, aiming to mitigate safety concerns on both pieces.

The infrastructure committee is not due to meet again until early 2021.