Drizzle couldn't dampen the celebratory mood in Kawerau as the community marked the grand opening of its retirement village. 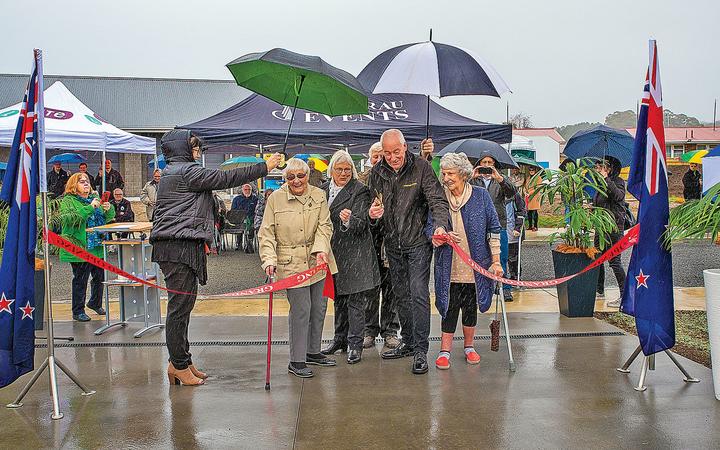 About 100 people gathered at the Porritt Glade Lifestyle Village at the weekend to celebrate, bless the village, and walk through one of the completed homes.

In a bold move, Kawerau District Council has built the village itself after developers expressed no interest in the idea. It was completed in partnership with Generation Homes and several local contractors.

Mayor Malcolm Campbell said the development had not been without its challenges, but he could not be prouder of the result.

The council aims to build 29 units in stages.

Four of the first six homes have already been sold and the remaining two are expected to be completed in September.

Three of the new owners, Zita King, Averil Edhouse and Kath Cook, said they were long-time Kawerau residents and wanted to stay in the town.

King said she had lived in Kawerau for 60 years but, unfortunately, could no longer manage her quarter-acre section.

She was well involved in the community and couldn't imagine living anywhere else.

Edhouse, a resident of 50 years, said she was looking for a low-maintenance home she could maintain her independence in.

"I really wanted somewhere nice and dry and new," she said. "This the perfect opportunity and the best option."

Council chief executive Russell George said it was good to get to this point in the build and it had been a long time coming.

George said developing and owning a retirement village was unusual for a council and he commended the elected members for being brave enough to take it on.

"It's good to see the amount of interest from the community here today and I'm really impressed with the quality of the build," he said.

Elected members have been involved every step of the way, with discussions around which side of the home would be best for kitchens and which side for bedrooms and suggestions like adding a study, which were taken on board.

Community members said they were impressed with the quality of the build, the modern yet classic look, and the large bathroom.

The road through the new retirement village is called Piripiri Crescent after the large boulders that were deposited on the site in a historic debris flow.

Some of the boulders were uncovered during the construction, including one that weighed 38 tonnes.

The 29 two-bedroom units are selling for $310,000 plus an annual fee which covers rates, insurance, gardening and mowing, exterior maintenance, and the statutory manager position.

Prospective owners should contact Peter Christophers at the council.