Waikura Road has been closed to heavy vehicles since a slip in August, leaving Waikura Valley farmers unable to ship livestock to the works - and without income - during one of their most lucrative seasons of the year. 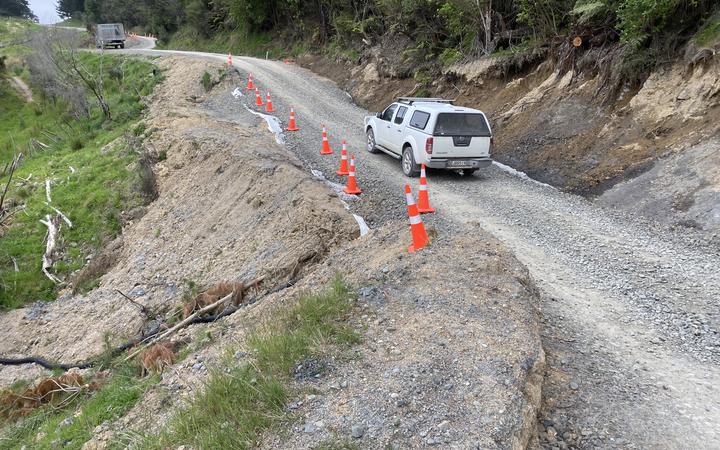 Waikura Road has been closed to heavy vehicles since a slip in August. Photo: RNZ/ Aaron van Delden / LDR

Repairs are due to begin this week and are expected to take three weeks. Waitangihia Station farmer Jodi Brosnahan said she and husband Sean would miss the deadline for shipping out about 800 lambs ahead of Christmas, when lamb commands a premium.

That wasn't ideal, she said, but farmers were a resilient bunch.

Gisborne District Council communications adviser Fraser Hopkins says more than 10,000 litres of water has drained from the slip site since it was drilled into last week.

A drilling rig was brought to the site - about four hours' drive north of Gisborne - a few days after farmers called a meeting with the council when they heard the road may remain closed to heavy vehicles for a further three months.

Given the quantity of water draining from the site, the road's weight limit had been further restricted, from 6 to 3.5 tonnes, until the land settled down.

At its peak, more than 1000 litres of water per day was drained from the site. That was down to about 800 litres by Wednesday.

Mr Hopkins said an update to valley residents would be provided on Monday regarding how road access would be managed while works were undertaken.

It would be a "bench and fill" repair, with a bench carved out below the road to provide a more stable base for fill.

The three-week time frame was dependent on fine weather and no further site movement.