Rumours circulating Kaikōura that it is possible to leave the town via the inland road are false, Civil Defence says.

A one-off convoy of private vehicles that left Kaikōura yesterday caused some damage to the inland road.

About 80 vehicles, including campervans and power company vehicles, were guided through the road yesterday afternoon. Civil Defence has no plans for another.

The road was opened between 1pm and 3pm and the vehicles went through in groups. A helicopter crew monitored progress from the air. About 100 people initially signed up to leave. 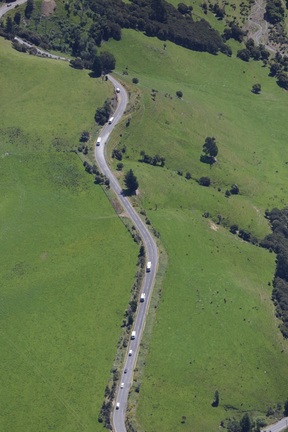 Cars and campervans were able to drive out of Kaikōura via the inland route yesterday. Photo: RNZ / Rebekah Parsons-King

Until then, army convoys were the only vehicles allowed on the road, which was badly damaged by the earthquake and still prone to landslips.

Civil Defence said all the vehicles in the convoy made it safely, but they caused some additional damage to the fragile road.

Civil defence controller Don Chittock said there were rumours circulating that it was possible for people to drive themselves out, or hitch a ride with the daily military convoys delivering essential supplies to the town.

"We've also had inquiries about getting a permit to drive to and from Kaikōura," he said.

The road remained closed to private vehicles until further notice. The convoy was unlikely to be repeated unless there was a strong demand for more people to leave.

A Civil Defence spokeswoman said no-one had tried to break through the cordon, but the district council had at least one person turn up today to ask if they could drive the route, after missing out on yesterday's convoy.

There were several similar inquiries on Civil Defence Facebook pages, she said.

Mr Chittock said work was still happening to make the route safe for general traffic, but strict controls would be in place until then, he said.

A few punctures along the way

Civil Defence official Glenn Mitchell, who helped control yesterday's convoy at the Kaikōura end, said one vehicle broke down en route. Another three got punctures, but were patched up and made it to Culverden along with the others.

Civil Defence controller Murray Sinclair said the army was winding down some of its services, while Urban Search and Rescue teams would leave Kaikōura by Tuesday.

Mt Lyford residents could use part of the Kaikōura inland road without an escort.

Showers and toilets in Kaikōura could be used again on a limited basis, but a boil water notice remained in place.

If State Highway 1, to the north and south of the town, took too long to re-open it could be a psychological hit for business owners and residents, he said.