Injured sharks, water filter breakdowns and a turtle welfare petition. What's going on at the National Aquarium of New Zealand? 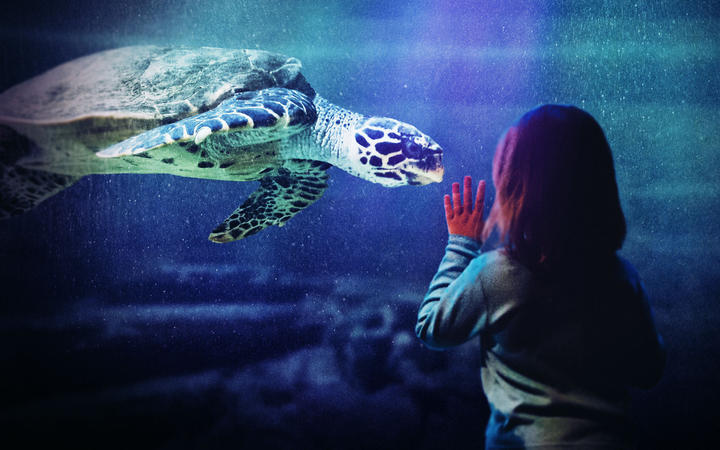 Terry at home in his tank at the National Aquarium. Photo: RNZ / Sam Olley / Vinay Ranchhod

Terry the solitary sea turtle brought tears to an Aucklander's eyes. Disturbed by the "dismal and depressing place", he gave it a 1 out of 5 on Tripadvisor and typed a scathing comment. "If this is our national aquarium we should be ashamed... The place just looked like they didn't give a toss."

Had he read a review from a couple of months earlier he mightn't have been so shocked. A visitor from Whangārei was also upset by the turtle's "awful" enclosure, writing: "Gone are the days where it is acceptable to display creatures in this way."

In fact, while most Tripadvisor reviews rate the aquarium favourably, for 10 of the last 11 years tourists have also logged on to the website to express unease about Terry's existence in Napier City Council's National Aquarium of New Zealand.

Some, like a South African tourist, were "haunted by the sight". "For as long as I tried, for the test [sic] of my holiday in NZ I couldn't get the tremendous sadness out of my heart."

Embracing Napier's seaside spirit, the city council has owned and managed aquariums in various forms along Marine Parade since the 1960s.

Terry, the 70cm, 45-year-old, Fiji-born Hawksbill turtle (now a critically endangered species), has been a popular attraction since arriving in New Zealand - when he was the size of a dinner plate - in 1979.

But are Terry and his fellow aquarium dwellers happy and well?

The council pays more than $25,000 a year to keep Terry in captivity in a 90,000 litre tank - about one twenty-seventh of the volume of an Olympic swimming pool. In the wild, male Hawksbills have been recorded migrating hundreds of kilometres.

It's not just sympathetic visitors on Tripadvisor who are worried; experts and former volunteers told RNZ they were also uncomfortable about enclosures at the aquarium. 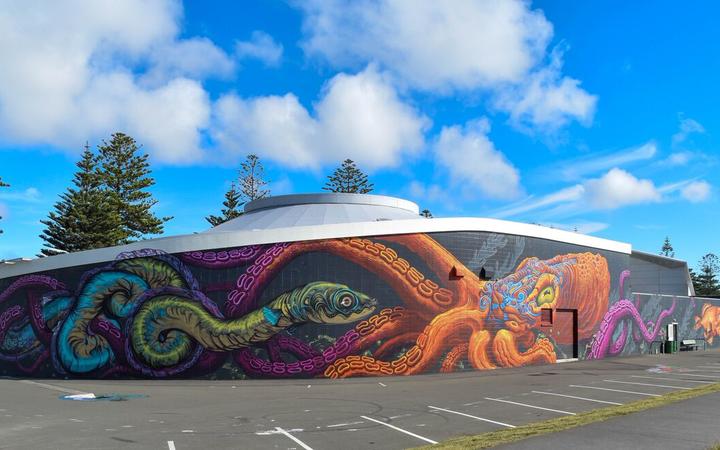 In August 2018, The Napier City Council distributed an optimistic media release about the aquarium saying "this facility has real potential". The government was giving $350,000 to the council to prepare a business case for upgrading the tourist attraction. The council was putting $1 million toward the pitch.

But last month, the council sent out a much more subdued media release saying the government "would not be contributing the required funding" for the $77.5m aquarium upgrade.

The business case - released to the public - shows the aquarium's infrastructure problems were much worse than the council expected. "The standards and expectations for animal welfare are struggling to be met," it says.

It found that "size and access into some exhibits is severely restricted" and this made diver access "extremely difficult" and transporting animals "exceptionally challenging".

The business case also says the largest tank, the 1.5 million litre oceanarium, had "sharp right angles and unsuitable concrete substrates that cause contact and injury to homed shark species".

There were "limited quarantine facilities" and "a complete lack of space to deliver any level of veterinary care".

"If these issues persist for any length of time, it is likely that accreditation of the Aquarium will be withdrawn, which will mean that the species currently homed in the facility will need to be re-homed or euthanised."

The aquarium has resorted to euthanasia before. In 2019, 21 red piranhas were killed when zoo new containment rules came in and the aquarium couldn't meet them.

Renowned San Francisco aquarium design experts EHDD supported the 2019 business case and were scathing about the current set up. It called the oceanarium's water recirculation system "inadequate" and said three large filtration tanks had been "non-operational for some time due to leaks and the inability to make repairs or replace the tanks".

EHDD also described staff safety risks. "The tropical reef exhibit tank has such poor headroom over the top that access even by a diver is very difficult, and very questionable from a dive safety/rescue perspective."

What the scientists say 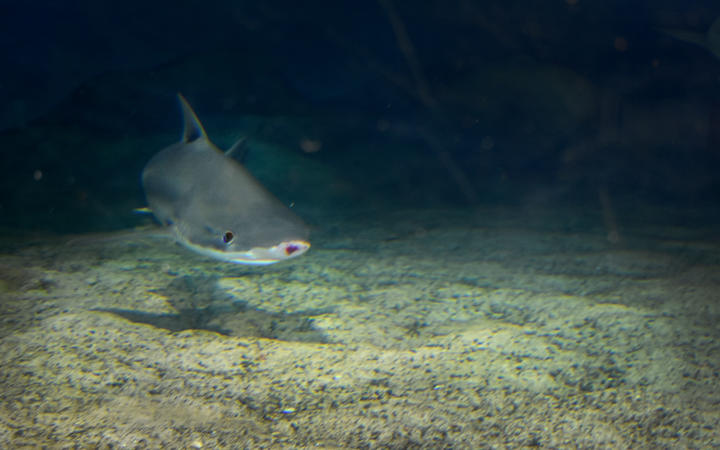 Massey University animal welfare science associate professor Ngaio Beausoleil read these reports after taking her children to the aquarium. "That facility is really old and it is no longer adequate to provide the welfare standards that we now believe are appropriate," she told RNZ.

"If you have a facility that is struggling to maintain appropriate water quality, then you will be setting yourself up for problems with health and therefore with welfare of the animals."

Professor Culum Brown, who heads the Behaviour, Ecology and Evolution of Fishes Laboratory at Macquarie University in Sydney, looked at photos of the aquarium's sharks taken by RNZ last month. "That's a pretty significant scratch and graze that they're developing on their noses," he concluded.

"Those often happen when sharks are smashing into the edges of enclosures repeatedly."

He said sharp corners, blind spots or heavily textured surfaces in an enclosure could cause shark nose injuries. Despite being very quick healers, sharks are prone to secondary infections if they don't have good water quality, he said.

When asked about the recurring wounds at the National Aquarium, Professor Brown said: "It certainly speaks to an ongoing problem."

The other side of the glass

RNZ spoke to former volunteers of the aquarium and former marine mammal park Marineland, that the Napier City Council ran until 2009.

One explained they had "mixed emotions" nowadays about animals in captivity. "When I visit [the National Aquarium] I do feel sad for the animals, some of whose enclosures are not ideal."

"We're learning more about animal sentience every day and how these small aquatic creatures may actually be more complex and aware than we previously thought," they said.

To stay open, they thought the building needed a "sizeable upgrade... more than just structural changes".

Another said they were now "generally against having marine life in captivity" and they were "uncomfortable" about Terry the turtle's restricted life. "I definitely feel that the enclosure is too small for him and the infrastructure and enclosure/tank sizes of a lot of the aquarium probably need improving."

They "loved" going as a child and hoped a new facility would have more of a focus on "indigenous marine governance and mātauranga Māori".

"There is a wonderful opportunity here."

Hawke's Bay mother Alarnah Robinson loved visiting the aquarium growing up, but when she took her own children in 2019, she was so "upset" at what she saw in Terry's turquoise tank, she collected 63 signatures in an online petition to Parliament. It called for closer inspection of Terry's health and wellbeing and a larger enclosure.

When she last visited Terry he remained in the "same tank, same place as when I went as a kid ten years ago". "Something needs to change whether he gets released or not... He needs a bigger tank."

Following reports that closing the aquarium was a real possibility, a new campaign to ensure it stays open got underway. It is being led by 16-year-old Amelia Otto, whose survey of 1000 school students showed 82 percent wanted the site to stay open, despite the government deciding not to bankroll an upgrade and an apparent funding gap.

Financial statements provided to RNZ show in the 2020 financial year, the aquarium's expenditure was more than $4.2m but its revenue was just $2.2m.

The Napier City Council declined to be interviewed but, in a lengthy written statement, the aquarium's general manager Rachel Haydon reiterated the facility was accredited by the Zoo Aquarium Association Australasia, who last completed a report in 2019.

She said money to "address some infrastructure concerns and ensure animal welfare standards can be maintained" had been set aside in the council's Long Term Plan 2021-2031. This will include upgrades to water pumps and tanks to address corrosion and leaks, replacements and repairs of heating and chilling coils in exhibits, checks on the building's electrics, roof and exterior cladding, a complete seismic assessment of the aquarium, and improving access to the oceanarium and Terry the turtle's tank.

Haydon also said the aquarium was considering moving Terry to the oceanarium for parts of the year but it would be too cold for him to be there all year round. "He has keeper interaction three times a day and enrichment items added to his exhibit to support the demonstration of natural behaviours at least once daily."

The enclosure was "an exhibit the team wants to improve" she said.

In response to a question about shark injuries, the statement cited "hard concrete surfaces" in the exhibit that are "difficult to change". Staff have changed feeding practices and stopped the "swim with sharks" experience to reduce "unintended contact with tank surfaces," and filters and water testing equipment have been upgraded.

The council will reconsider the landmark's future next year and consult the community. For now, however, there may be little more aquarium representatives can say to those with strong views on its future, than their go-to Tripadvisor response: "Thank you for your feedback."