Warning: This story contains graphic images of a head injury that may distress some people

People with epilepsy say their lives are being turned upside down by seizures after the government drug buying agency, Pharmac, pulled funding for their medicines in a cost savings drive.

An RNZ investigation has discovered multiple cases of patients having seizures after switching to a generic form of lamotrigine called Logem. 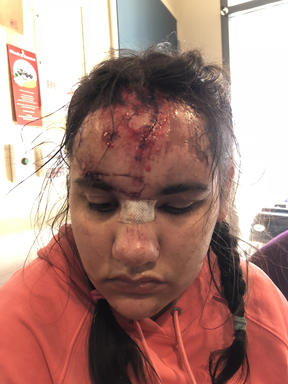 Rachel Nelson needed 15 stitches in her face after falling on concrete during a seizure. Photo: Supplied

The patients put their adverse reactions down to changing medications and three said they had good seizure control until making the switch.

RNZ has also learned that the New Zealand Transport Agency (NZTA), acting on concerns from MedSafe, is now recommending some patients making the drug switch consider voluntarily standing down from driving for eight weeks.

About 11,000 people, who mainly have epilepsy, although some have bi-polar, are being forced to switch medicines after Pharmac pulled funding for the Lamictal and Arrow brands of lamotrigine. Funding for those brands ends tomorrow, but some patients were switched as the deadline approached.

The switch will save Pharmac $30 million over five years, and comes after the drug buying agency struck an exclusive deal with the company Mylan to fund Logem, which was the least popular of three lamotrigine brands, with just 5 percent of epilepsy patients using it. Brand switches are a critical tactic for the Pharmac model, as they allow the agency to free up money within its capped budget to spend on other drugs.

Pharmac made the Logem drug switch against the advice of MedSafe, who warned it "goes against international consensus on switching brands of anti-epileptic medicines". The MedSafe advice, released to RNZ under the Official Information Act, said the move "poses a potential significant safety issue". 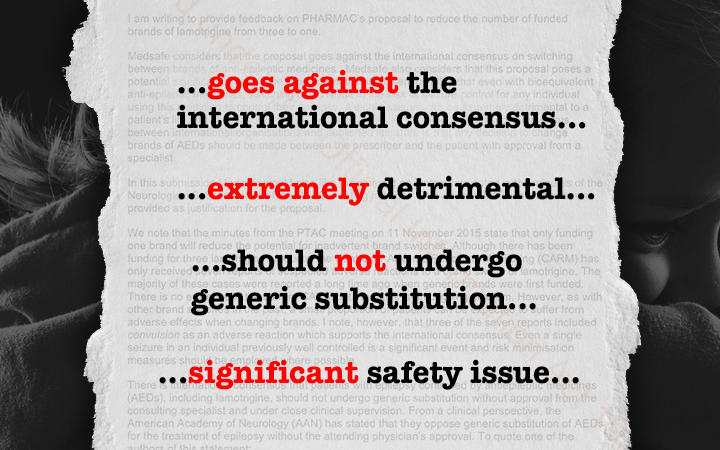 Medsafe was against the drug switch and in a letter to Pharmac warned of significant safety issues. Graphic: James Sanday

Epilepsy New Zealand president and neurologist Peter Bergin said the switch could have "major consequences" for a "small but significant" group of people. "I think it's an unnecessary risk that Pharmac have taken.

He said in theory Logem should be the same as the Arrow and Lamictal brands Pharmac had been funding, but the issue was whether it was absorbed into the body at the same rate. "As a neurologist, I'm slightly uncertain about whether the absorption characteristics in the different tablets are going to be exactly the same." He said for most people there would be a 10-20 percent difference in absorption and that would not cause problems, but for some people who had been seizure-free but "who are just on the edge", it could be enough to cause seizure recurrence.

"The real difficulty is that we won't know whether people who have seizures have done so because they've changed the drug. The reality is that even if someone has been seizure-free for a year, there's no guarantee they'll remain seizure-free for the next year."

Mr Bergin had advised Pharmac it should trial the switch first. "They told me that it was an interesting idea but that they had already made the decision and they didn't see the merit in undertaking a study."

Pharmac's director of operations Lisa Williams said people who were clinically assessed as needing to stay on their original medicine could apply to have that funded. "It's impossible for us as a funding agency to predict who these people are. So that's why we rely on the health system to identify those people for us and make those applications so that we can ensure that they can stay on the original funded brand."

Pharmac had received 21 applications for special funding: eight had been approved, four had been asked to trial Logem first and the others were being considered. Ms Williams said the MedSafe concerns were put to Pharmac's expert subcommittee for neurology and mental health. "Their advice was that there wouldn't be a clinical problem."

Pharmac said 10 adverse events involving lamotrigine had been reported to the Centre for Adverse Reactions Monitoring (CARM) - although it is not possible to say whether brand switching caused the problems.

The CARM numbers may not reveal the full impact of the switch - none of the patients RNZ spoke to had filed CARM reports and some feared losing their driving license if they did so. Also, only 25 percent of the 11,000 affected patients have made the switch so far.

Pharmacist Samantha Tibshraeny, of Grey Lynn Pharmacy in Auckland, said patients were nervous about the change. "To be honest I haven't really been switching anyone over yet and most people have been requesting to stockpile their current brand."

One of those scared to switch is 25-year-old Sinead, who said juggling work, university study and being a single mum left no room for error in managing her epilepsy. She was quoted $320 a month to stay on Lamictal and would find the money somehow as "there's no way in hell" she would switch to the generic. "I could lose my license, I could, like, have to have time off work … I could take the new Logem and then go to school and then all of a sudden have a seizure in front of 120 students."

Sinead was angry at being forced or make the switch or pay to remain on the same medication. "It actually disgusts me. Like you're putting people's lives at risk. They're like, 'Well, listen here, if you can't afford it - too bad, you have to take the generic cheap stuff'. It kind of just seems like they don't care."

Pharmac's Lisa Williams said the agency understood there was anxiety about the change. "I would just want to reassure them that the clinical experts … have assured us that Logem works the same way as the two other lamotrigine brands, it has an active ingredient that's delivered to the body in the same way. Our advice is it should have the same effect as the other brands."

However Medsafe advised Pharmac patients should not switch between brands without input and monitoring from specialists. That had not occurred with any of the patients RNZ spoke to. 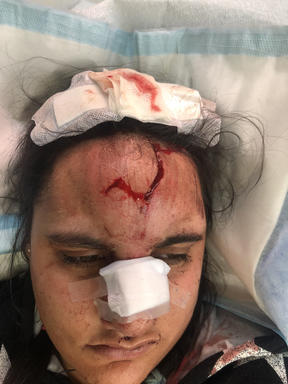 Rachel Nelson says her daughter's condition has worsened changing drugs. During one seizure she fell heavily on concrete. Photo: Supplied

Shirley Munro, a wool classer in Alexandra, said her daughter Rachel Nelson was switched to Logem without either of them being informed of the change.

Rachel is 24 years old but has the mental age of a child as a result of a severe form of epilepsy, Lennox-Gastaut Syndrome. She has a history of serious seizures but Shirley said her condition became much worse after she was switched to Logem. During one seizure she fell heavily on concrete. "It's not good when you come home from work and you look at your daughter and she's got 15 stitches up her face and two black eyes," Shirley said. "And then you find out the reason is because someone's decided that they don't want to sell a particular drug anymore, they want to change it and they don't see the consequences of it."

Shirley only realised Rachel's medication had been changed when she saw a post on Facebook about Pharmac's switch. She checked Rachel's medication and realised it was different. She said she wasn't told by medical staff or the pharmacist that Rachel's prescription had been changed. After discovering the change she said it suddenly made sense to her why Rachel's condition had deteriorated.

Shirley decided to pay $140 a month for Lamictal for Rachel, which she believed would give her daughter better seizure control. "They are mucking with peoples' lives," she says of Pharmac's decision. "They're not looking at people's health or their safety."

Auckland woman Lisa said her husband Phil had been leading a normal life using Lamictal for the past six years. In July she collected his medicine from the pharmacy and was given the Logem generic and told that Pharmac was no longer funding Lamictal. "This was the first time we had heard that there was going to be a change."

Lisa said after taking the new brand three times her husband had a seizure. "Now that Phil has had a seizure, everything in our lives is affected. Phil is not allowed to drive for a year. I am driving him everywhere. This also affects his employment."

Phil went back on Lamictal and is now seizure-free but it costs $531 a month. "How do you afford this if you can't work due to having seizures because of the medication change? When you decide to change medications on us just to save a few dollars, what about our lives?" 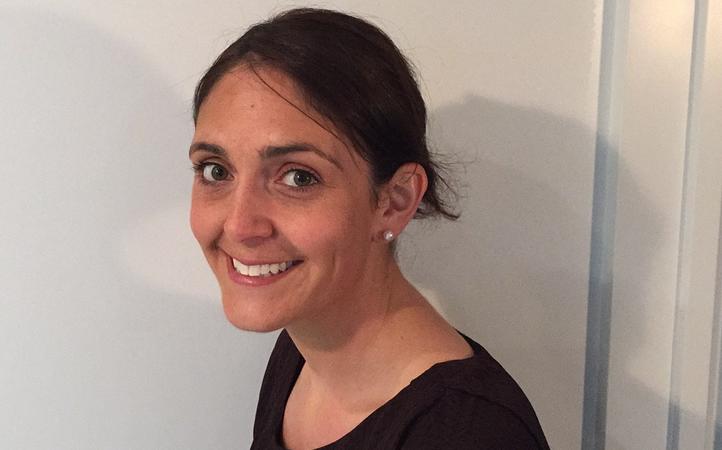 Emma Black had been seizure-free but within 10 days of switching drugs she suffered an aura. Photo: Supplied

Emma Black, a psychologist and HR consultant, has had epilepsy for 20 years and struggled with seizure control before settling on the Arrow brand of lamotrigine which left her seizure-free for seven years. Knowing the brand switch was coming she changed to Logem. "On day 10 I had a full aura. An aura is what happens to me usually at least 30 minutes before I have a full seizure." The full seizure never came but Ms Black took ten days to recover from the aura, as she suffered from blurred vision and a rash on her torso. With two children under seven and her own business to run it had "a huge impact" on her family.

"Why didn't you listen to what Medsafe said," she asked of Pharmac. "And why are you making this decision, which basically just comes down to money, when you're putting so many people at risk?"

She has returned to her original brand, Arrow, but is worried the company may pull out of New Zealand if supplying here is no longer financially viable without Pharmac funding. "It may be that I have to go to Australia every few months to get a prescription from an Australian GP, and bring the medication back with me. But obviously, that's a last resort."

An Auckland man whose mother switched to Logem said she had lost seizure control. John has a science background and was generally supportive of the Pharmac model but thought the agency was taking surprising risks in this case. He said his mother was on the Arrow brand and within 48 hours of fully switching to Logem she had two convulsive seizures, the first lasting 45 minutes and a second one which she was sedated for. "They were the largest seizures she's ever had. It took her about nearly a week to come right."

She was seizure free for another two weeks and then had another four-minute-long convulsive seizure. "Now she's worried about having a seizure at any moment as are people who are around her." John said she had a blood test and the levels of lamotrigine in her blood on Logem were at half of what they had been for Arrow.

Arabella Gubay, whose four-year-old daughter has epilepsy, said the switch had been a "horror show" with people's lives turned upside down by seizures. "You are talking about playing Russian roulette with some of New Zealand's most vulnerable people and their doctors aren't even aware that this is happening to them."