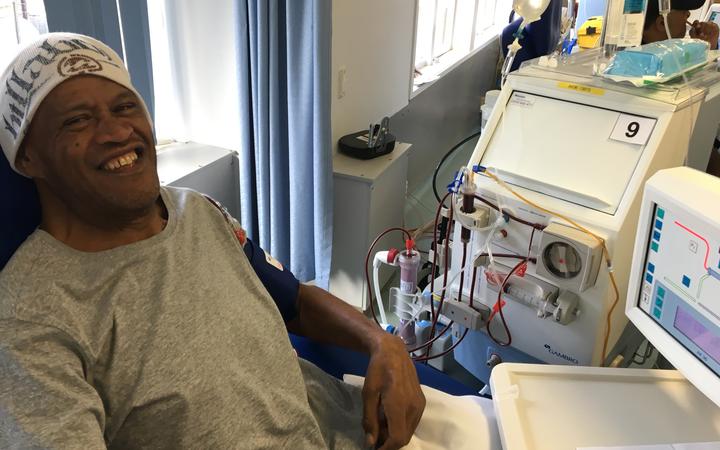 This is the third story in a four-part investigation into how Pharmac works and whether its model is costing lives. You can read part 1 here: The NZ Buyer's Club.Part 2 is here: Pharmac's secret list.Part 4 is here: Pharmac switches epilepsy drug against Medsafe advice. Listen to Guyon Espiner discuss this investigation here: Drugs and Money

In his early twenties Ben Tawhai was a 120kg lock, playing senior rugby for Otago. In his mid-50s he's hooked up to a dialysis machine five hours a day, three times a week. "It's pretty hard," he says. "I watched my dad go through this too. I always said to myself I don't want to be in this position but it's too late."

Now his two adult children are watching him. "They have come in here a couple of times. They don't like to see me like this."

Plugged into the dialysis machine next to him is another Māori man, a little younger. His left leg has been amputated below the knee. This is what end-stage renal failure looks like, explains Dr Brandon Orr-Walker, an endocrinologist at Middlemore Hospital, which has the largest dialysis service in Australasia. The ravages of diabetes have killed off most of the kidney function and the dialysis machine has to do the work, removing waste from the body.

The faces in this room are all brown. Māori have double the rates of diabetes, five times the rates of renal failure and three times the number of lower limb amputations compared to non-Māori.

"If type 2 diabetes was a city, it would be Hamilton," Orr-Walker says, as we head off to meet more of his patients. "It would be our fourth biggest city. It's 240,000 people."

Yet Orr-Walker, who is also president of the Society for the Study of Diabetes, says New Zealand's access to type 2 diabetes medicines is atrocious: "We're working with a pharmaceutical kete which looks like the same one that you would use in a third world country. But the moment you slip into kidney failure, you will have first world provision of dialysis services."

Even our drug-buying agency Pharmac admits the insulin it funds isn't the ideal drug for type 2 diabetes. So, why, when we have a Hamilton-sized diabetes problem, don't we have better medication?

It's 9.47am on a Friday and there are 180 people being treated for diabetes at Middlemore Hospital. "There were 175 a hour ago," one of the staff members says.

"They're coming in the door at about five an hour," she says, tracking the live data.

Seine Tauia has been in overnight and on insulin, to bring her blood sugar levels down, for the last two years. "How do you find that?" Orr-Walker asks. "Annoying," she laughs. She's a 54-year-old with a big family and it's hard to find the time for daily injections. 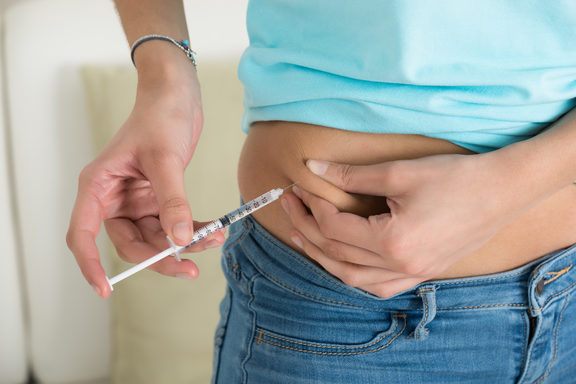 Insulin comes with the risk of hypoglycemia. Photo: 123rf

Insulin lowers blood sugar levels but if you take too much for your carbohydrate intake, you can go into hypoglycemia. That can result in coma (and the potential loss of your job or driving licence) or even death.

Anything under a blood sugar level of four millimoles per litre is considered hypoglycemia. New Zealand diabetics are advised, 'Four is the floor'. The body gives a warning but, if it happens often, people can stop noticing the alarm bells.

That is where Tauia is now. "Most mornings for the last two years I've been on 3.2 or 3.8," she says. "I used to shake a lot, like a freezing sort of a shake. But then after a while my body started getting used to it."

Back in his stuffy office in an unloved corner of Middlemore Hospital, Orr-Walker explains that, while commonly used, insulin isn't the best treatment for type 2 diabetes. Not only does it come with the risk of hypoglycemia, it also promotes weight gain in patients who are often already obese.

"Insulin is a last line of defence. It represents a failure of all other treatment options." However, New Zealand clinicians often resort to using it as Pharmac won't fund most of the modern medicines for type 2 diabetes.

Orr-Walker has seen Pharmac from the inside - having served on its expert diabetes subcommittee - but now he's accusing the agency of putting commercial deal-making ahead of expert clinical advice, of abusing its own processes, and bragging about its cost savings while our most disadvantaged communities get sicker.

He challenges Pharmac's claims that by cutting deals and cutting costs it saved New Zealand $7 billion over the past decade. Orr-Walker says Pharmac's approach to diabetes is like kicking the can down the road.

Saving money on medicines isn't really cutting costs for the health system if those people end up on dialysis, he says. There are 645 people on dialysis at Middlemore Hospital, at a cost of $50,000 to $100,000 each per year.

New Zealand's first-line type 2 diabetes medicine is Metformin. It works, Orr-Walker says, but it's been around since the 1970s and it's "dirt cheap", costing about 5c per tablet.

Many developed countries have been publicly funding three new classes of drugs to treat type 2 diabetes for the past five to 10 years. The first class are gliptins, the second class are the GLP-1 agonists and the third class are flozins. These drugs might sound like droids from a sci-fi movie, but actually help manage blood sugar control with less risk of hypoglycemia and weight gain than insulin. Orr-Walker calls them "game changers".

Pharmac has repeatedly turned down applications to fund these drugs. It funded one of them in 2004, but it was another 14 years until it funded another. The way Pharmac went about funding the latter drug, last year, left Orr-Walker asking whether Pharmac was more about commerce than health and science. The drug it funded was Vildagliptin, and it funded it because of a key tool in Pharmac's commercial negotiating playbook, known as bundling.

Bundling, to use a blunt analogy, is the equivalent of buying a frying pan and a rice cooker and getting cheap steak knives thrown in for next to nothing. Pharmac might cut a deal with a drug company for some medicines it really wants - and the drug company will throw in a couple of medicines Pharmac isn't so interested in as part of the bargain. 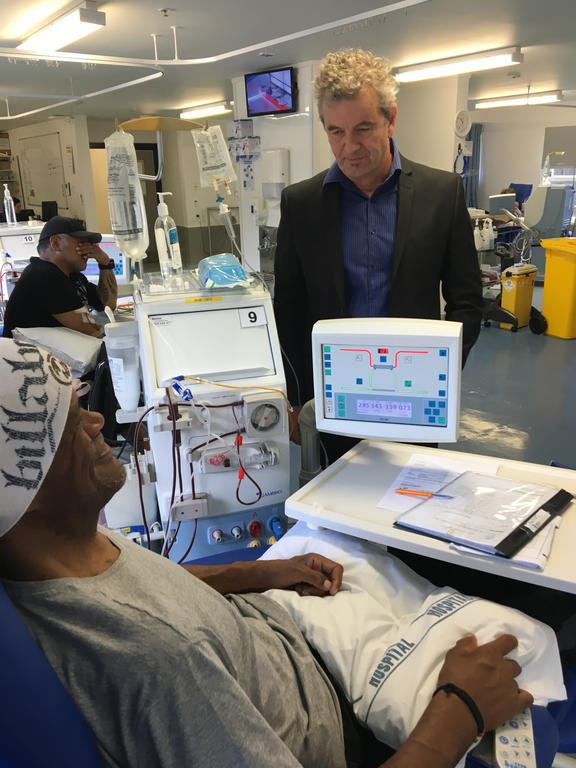 In 2018, Pharmac did a bundling deal with drug giant Novartis. It involved 10 pharmaceuticals covering a raft of ills, including dermatological, cardiological and respiratory conditions. Tacked on to the deal was a type 2 diabetes drug, Vildagliptin.

It meant after 14 years of waiting for a new medication, diabetes experts got a drug low on their list of 'must-haves', Orr-Walker says. What's more, he says Pharmac funded it despite the drug not having approval from the FDA, America's medicine watchdog. Pharmac had previously repeatedly delayed approving other diabetes drugs in the same drug class on the grounds the FDA hadn't reviewed those medicines' trials, he says.

On top of that, Pharmac made the decision to fund Vildagliptin without input from its own expert committee on diabetes, which had previously given the drug 'low priority' status.

"This decision making is being done on a purely commercial basis, it would appear, because there's no other basis to to justify it," Orr-Walker says.

In February, in his role with the Society for the Study of Diabetes, he wrote to Pharmac, blasting the agency for the decision and warning "delays and growing treatment gaps" were impacting on patient care and equity.

He said while delays with drugs "may be saving Pharmac's budget, it is costing other sectors of the health system funded by the government and it is costing lives. In New Zealand this population is disproportionately poor, Māori and Pacific. Inertia around decision making is coming at a large human cost."

The letter repeated concerns he had already raised at a meeting with Pharmac cheif executive Sarah Fitt, board chairman Steve Maharey and Health Minister David Clark.

Sarah Fitt says if Pharmac didn't consult its diabetes expert committee, it would have received advice 'through other ways'. Photo: RNZ / LUKE MCPAKE

Ask Sarah Fitt about the Vildagliptin deal and the lack of clinical advice and she says this: "We would have had original advice, but I'm not sure if we went back to [the expert committee] once we got that proposal."

Tell her there is no record of any consultation with the diabetes expert committee and she says sometimes "we get advice through other ways".

What advice did Pharmac obtain on Vildagliptin? "I'm sorry, I just can't recall."

Fitt concedes that by doing bundling deals, Pharmac can end up funding a low-priority drug while high-priority medicines remain unfunded, but she rejects criticism that the drugs Pharmac funds for type 2 diabetes are outdated. "They work. I mean, insulin works. You know, there's lots of medicines we fund that are old. They don't stop being effective."

But is insulin an ideal drug to manage type 2 diabetes? "Probably not. But it's pretty good at the moment."

Seine Tauia hopes to check out of Middlemore in a day or two, and will continue using insulin at home. She knows hypoglycemia is a risk, especially now she no longer gets the shakes as a warning her insulin levels are dangerously high. "I know how to respond to it. Like, when it comes I always have something sweet, ready by my side or in my bag."

Her dad died of diabetes at 69 years old. "My mum has it. My brothers have it. It runs in the family." She's trying to stop diabetes affecting another generation. "That's all we can do as parents - just remind our kids that it's in your blood. So you just have to watch your diet."

Indeed, lifestyle factors, such as diet and exercise, have long been known to be important in the prevention and management of type 2 diabetes. But Orr-Walker says medicines have a big role too.

Pharmac, he says, needs to remember that.

"We offer bottom-of-the-cliff, keep-you-alive processes at first world standards and at first world costs. But just before that we're not willing spend the money on the medicines."