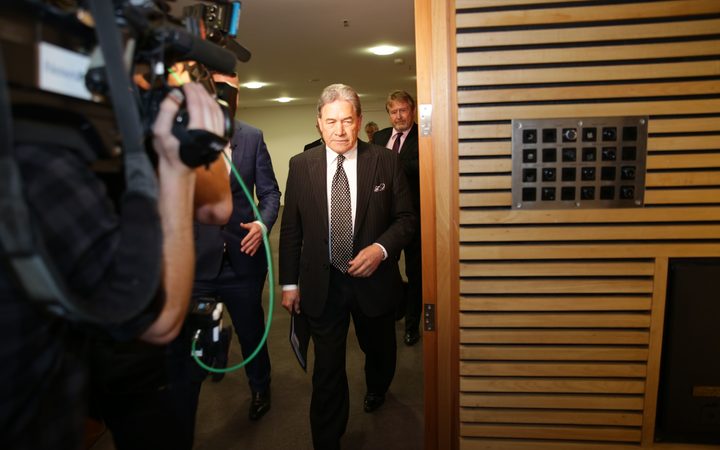 Winston Peters on his way to make the announcement this afternoon. Photo: RNZ / Richard Tindiller

New Zealand First leader Winston Peters kept the country waiting for almost a month. His delays brought us to the verge of mental collapse. He pulled the same move today.

Mr Peters told us to expect an announcement this afternoon. The Beehive has rarely been as tense as over the past few weeks. Rumours circulated all day, yet for all the trigger-pulling by media, no one knew for sure beyond their best guess.

Frazzled politicians looked lost wondering Parliament's endless corridors. Only David Seymour knew his fate for sure - on the opposition benches. Peters can be congratulated. There were no leaks. He kept us guessing until the end. He ate soup at a Vietnamese restaurant at 1pm. Cameras snapped him through the windows. Classic paparazzi move.

Soon after lunch, a hurried Paddy Gower loudly proclaimed Peters had been seen going into Labour's office more than once. Journalists called Parliament administration to find out if the Beehive's theatrette, where press conferences are often held, had been booked and kept free all day. "It's definitely happening."

A microphone was prepared and a small plinth was placed behind the theatrette's lectern about mid-afternoon. Is Winston so self-conscious about his height? A short time later, it was gone. "I can't handle this."

press sec, beer in hand, tells me it is "just family feud"

One journalist thought he heard clapping from Labour's office. Turns out it was the television, according to an official. They were watching Family Feud.

"Did Bill English look disappointed this morning when he spoke to media?" someone asked.

"I thought he looked confident," came a response.

The 6pm news headlines came and went. New Zealand stared hopelessly at an empty stage and four deflated flags for almost an hour.

Earlier this year and countless times in the past, Mr Peters has criticised the 6pm news programmes. Was he watching, delighted, as they scrambled for content? A group of reporters stood patiently by the lifts as the numbers flicked up and down. Yet, no Peters emerged. For weeks, reporters have dined on takeouts and put up with Mr Peters' constant flagellation. They looked exhausted.

The words "taking the piss" were heard more than once. At 6.30pm, Mr Peters' Facebook page announced a video would shortly go live. "'Shortly', what does 'shortly' mean?" Did he plan to go viral?

At 6.50pm, his caucus MPs shuffled in and lined the theatrette's wall. Shane Jones stood apart from the group at the back. They all clasped their hands and waited for their leader.

Mr Peters started his speech by reminding the nation there had been an election. But it quickly became about him.

"This is a decision made by New Zealand First," he argued.

That the next Prime Minister, Labour Party leader Jacinda Ardern, didn't announce the next government was odd enough.

Mr Peters hinted at fraught negotiations with Ms Ardern and National leader Bill English. We'll have to wait to read about them in his memoirs.

He read defiantly, if a little deadpan. He shuffled his speech papers a few times but stumbled only once.

His speech rambled. He mentioned Germany and capitalism and talked of the past. Yet he also spoke with an attitude and may as well have stood with two fingers pointed up. In 1996, it was 10 minutes into Peters' speech that he revealed his decision. This time it was only seven.

He looked up. The room inhaled. History was made... by him.

There was no applause inside the theatrette. The questions started. Mr Peters revealed he hadn't privately told Ms Ardern or Mr English his decision. They had to sit in suspense like everyone else.

He hinted he had been offered the role of Deputy Prime Minister. Any any other roles he wants are his, basically. He's that powerful.

He was asked if his caucus was united in picking Labour. He said they had reached a consensus decision. His MP, Tracey Martin, nodded vigorously.

Ms Martin and her colleagues shifted to the back of the room. They wanted to avoid the cameras, Fletcher Tabuteau could be heard saying.

Not Mr Peters, who remained at his podium for about half an hour. This was his moment.

But it's time for him to hand over to Ms Ardern. Time will tell how much power he retains.