The Labour Party leader and now Prime Minister Jacinda Ardern says it is an "absolute honour and a privilege" to be able to form a government for all New Zealanders.

"Mr English has already called me this evening and acknowledged that for the national party negotiations have now concluded," Ms Ardern said.

At a long-awaited press conference at the Beehive Theatrette earlier this evening, New Zealand First leader Winston Peters announced the party had decided to go with Labour.

Labour has 46 seats, which together with the Green's eight and New Zealand First's nine, gives them 63 seats in the house, and a majority of seven over National.

Ms Ardern described the negotiations as robust and rigourous but said there had been more that united the parties than had divided them.

"Labour has always believed that government should be a partner in ensuring an economy that works and delivers for all New Zealanders. We also believe in a government that looks after its environment and that ultimately looks after its people.

"And I believe that Labour has found true allies in Parliament to deliver on that." 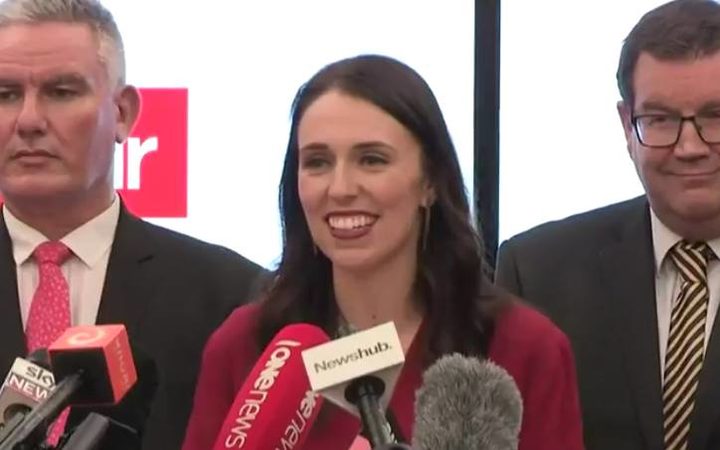 Jacinda Ardern speaks after New Zealand First leader Winston Peters said the party had chosen her to be the next Prime Minister. Photo: Screenshot / RNZ

She set out a timetable for government formation from here on in.

She said Labour would hold a caucus meeting tomorrow afternoon to decide cabinet positions and early next week would sign and release agreements with both New Zealand First and the Green Party.

Ms Ardern said she expected to announce ministerial portfolios later in the week.

The Green Party has also been offered ministerial portfolios and Ms Ardern said Labour had tried to ensure it was as proportional as possible.

Ms Ardern paid tribute to New Zealand First leader Winston Peters saying they had a partnership and would continue to learn from each other.

He had been offered the deputy prime minister role and was considering it.

Ms Ardern said she only learnt of New Zealand First's decision to go with Labour at Mr Peters' media conference.

"I enjoyed the theatre of being with everyone at the same time as I joined with New Zealand as we collectively learnt the information together."

Labour stood by its policies of moving to curb foreign ownership of critical infrastructure and property, she said.

And she said the country needed an economy that focused on job growth and did not just rely on rising house prices.

She has not ruled out re-negotiating the Trans Pacific Partnership agreement.

She has also signalled that a Labour-led coalition government would look at a re-entry of the Pike River Mine to retrieve the bodies of 29 men who died in the 2010 explosion as it has been a priority for all three parties.