Power Play - The New Zealand First board has packed up and gone home, and there is now a real sense of momentum towards the ultimate goal of forming a government. 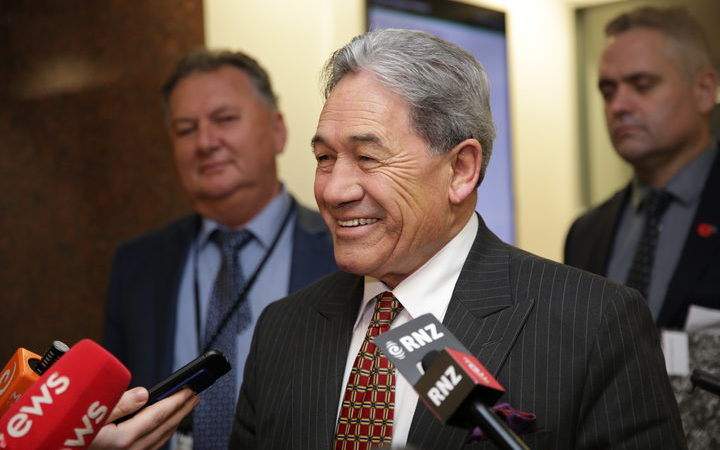 After two days of dodging the media, board members, alongside the party caucus, "almost" came to a consensus over two separate policy proposals from both National and Labour.

There remain "differences in calculations and opinions" at the edges, according to the leader Winston Peters, which the caucus will try to resolve today.

He will want everything nailed down before starting to talk about what a government supported by New Zealand First might look like, including ministerial roles, because once the deal has been done there is no going back to re-negotiate disputed parts of the agreement.

In what has become a familiar routine Mr Peters came down late yesterday to brief a waiting media pack (now running on biscuits handed out by political passers-by and sausage rolls kindly provided by Parliamentary catering) about the next steps.

It was only a sharp-eyed reporter who spotted the National leader Bill English heading towards the room the coalition talks had been held the week before, that alerted the press pack to meetings called swiftly by Mr Peters after the conclusion of the board meetings.

That was the first time throughout this negotiating process Mr Peters has met with the leaders one-on-one.

He said any decisions about ministerial positions and governing arrangements were up to the party leaders to discuss, but talks with no-one else in the room could be getting down to the more personal; assurances about how a government would work and importantly the leaders' relationship.

Mr Peters will also be approaching this process with his eye on the longer game.

In his early 70s, he will be looking beyond his tenure as leader, at how to ensure the continued future of the party he established in 1993.

Even the way the negotiating process will be remembered in history will be important - Mr Peters would not want it depicted as being all about him, or all about the rewards of ministerial portfolios.

But he has broader considerations and there may be ways he can help to secure the existence of New Zealand First past 2020 during these negotiations.

National has proven itself willing to strike electorate deals with parties that can put it into government.

It also mounted a hard campaign against the party vote of New Zealand First and against Mr Peters himself in the Northland electorate.

He may seek electoral accommodations in some seats to give his party a fall back option if it does not reach the crucial 5 percent threshold, or an assurance National would not actively campaign to cannibalise the New Zealand First vote.

Of course, none of this needs to be specifically spelt out in a formal deal.

But the parties are edging towards a final decision.

The Treasury has been "assisting" opposition parties with costing of election policies - it hastens to say that does not constitute "advising" parties, nor would it say which parties it had been working with.

The next step, however, is resolving any differences of opinions over costs, or potentially the details of implementing the policy proposals, before they are returned to the New Zealand First Board for final sign-off.

As they have been now for several days Labour's Executive Council, National's board and caucus and 150 Green Party delegates are poised to ratify a deal once it emerges.

But for now, we wait.