Workers at a Gisborne packhouse have challenged Bill English at a visit that was supposed to be stress-free for the National Party leader. 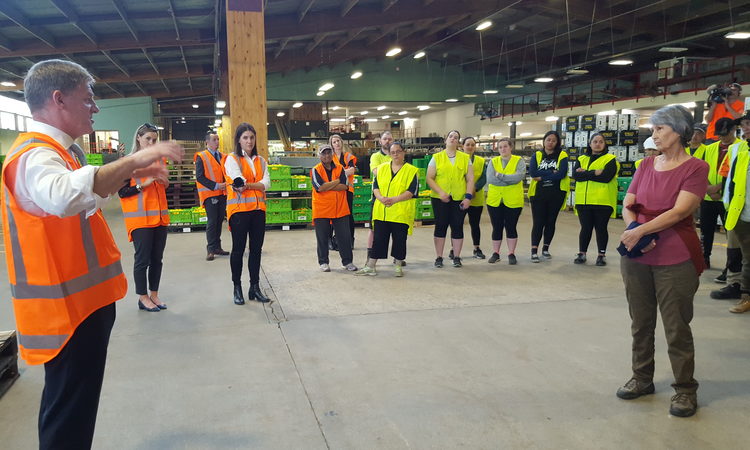 Mr English, flanked by local MP Anne Tolley and Primary Industries spokesperson Nathan Guy, arrived at Kaiaponi Farms in Gisborne to have a look at the packhouse and talk to workers.

The visit was one of a string that Mr English is making to rural areas in an attempt to shore up National's provincial vote and also attack Labour's plans for a water tax.

But the Gisborne visit did not go as planned.

After an inspection of the packhouse in action, the production line was stopped and workers gathered around to hear Mr English speak.

After spending most of his speech criticising Labour's tax plans, Mr English opened the floor for questions, and was immediately challenged by packhouse worker Robyn Lane on the minimum wage.

"Given that we've got a strong economy, why is it that the adult minimum wage only goes up 25 cents a year?" she asked.

"I know you said it's the cost of living, but that's not really true - it's not."

Mr English said it was the ability of a wide range of industries to be able to pay a wage that determined whether jobs could exist.

"At the moment you've got the economy going well so there is a wider availability of jobs and we underpin that with the minimum wage.

"Fundamentally pay is a matter between employers and employees, they decide it and the government puts a floor in that and we keep lifting that up."

As Mr English's staff looked increasingly uncomfortable, Ms Lane argued low-wage workers were not getting the benefits of the growing economy that Mr English kept talking about.

Mr English told her a National-led government would continue to raise the minimum wage, but she said that was simply not enough.

Mr English said that would be a challenge for him.

Other workers asked Bill English about one of their colleagues who had a heart attack and was unable to get a sickness benefit, saying the worker and his wife were struggling to stay afloat on the income from one minimum wage job.

Mr English said he could not comment on individual cases, but advised they take their case into Anne Tolley's electorate office, which he said was the best way to deal with the situation.