Two new polls have affirmed a moderate downward trend in National's support since July -- but only to a still-high level of support at which to govern it would need, at most, support from ACT's and United Future's single electorate seats. National's latest four-poll average was 48.4%.

(Explainer: The POLL of POLLS is an arithmetical average of the four most recent major polls since mid-June, from among the following: TV1 Colmar Brunton, TV3 Reid Research, Fairfax Media-Ipsos, NZ Herald DigiPoll, Roy Morgan New Zealand (up to June only one of its two-a-month was included) and UMR Research, which is not published.*)

Labour looks to be troughing. But it also appeared to have troughed in July, only to drop again in early August. Its latest average was 26.2%, below its whole-of-2014 average of 28.8%.

The polls in the latest four-poll average were all taken after Nicky Hager's Dirty Politics book was launched on August 13 but before Judith Collins' sudden resignation on 30 August. The latest midpoint between the start and finish of interviewing was 25 August.

Amidst all this, the Greens held steady at a 12.5% average, which would net it 16 seats, half of the total Labour could expect on its reading. 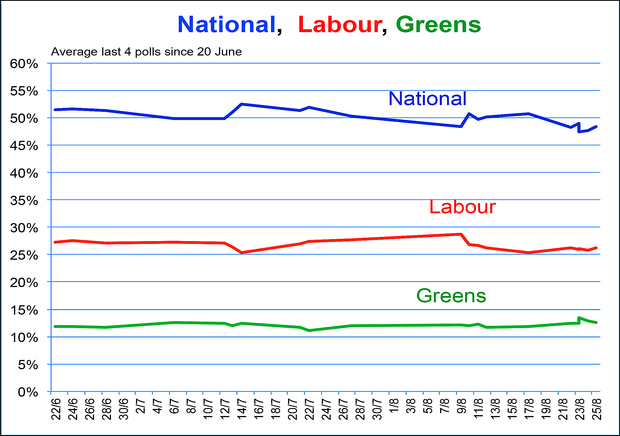 National's downward trend has pulled its lead over Labour and the Greens combined down to a still strong 9.7%. 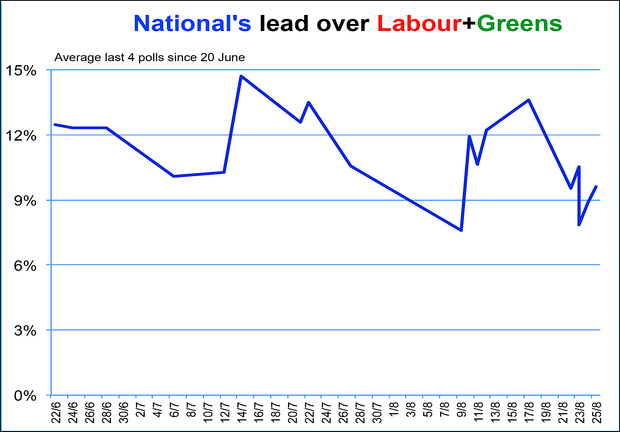 The two winners from the fallout from National and Labour have been New Zealand First, average 5.2%, and the Conservatives, average 3.1%, both slightly down from recent peaks. Internet-Mana was 2.6%, the Maori party 0.9% (not enough to bring in additional seats to Te Ururoa Flavell's electorate seat unless other candidates win electorate seats), ACT 0.4% and United Future 0.2%. 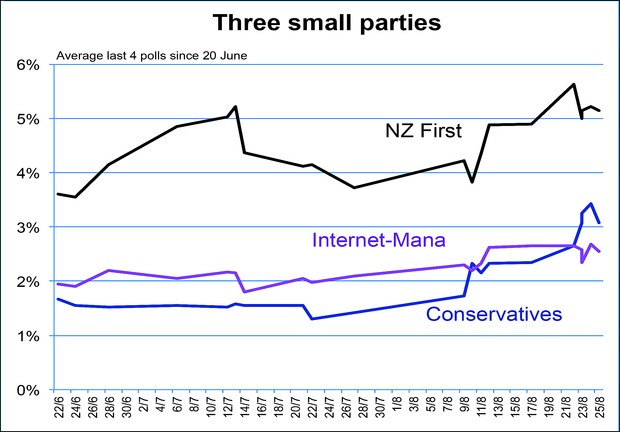 The next Roy Morgan poll is expected this week. So its strong reading that the country is on the right track is unchanged. 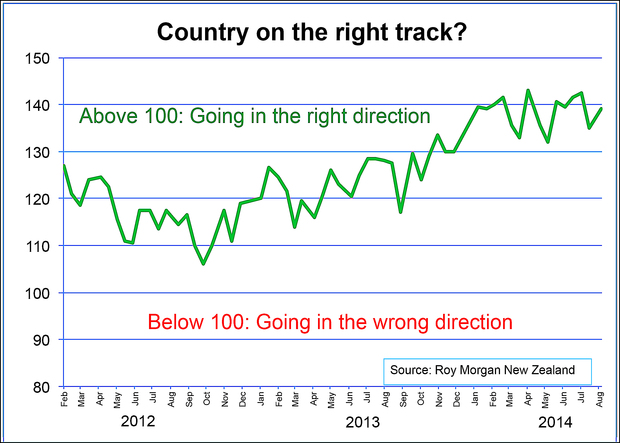 (* The four polls included in the latest average were, in date order of the midpoint between the start and finish of voter interviews, Fairfax, NZ Herald, UMR and TV1 The poll on whether the country is going in the right or wrong direction is from Roy Morgan New Zealand.)